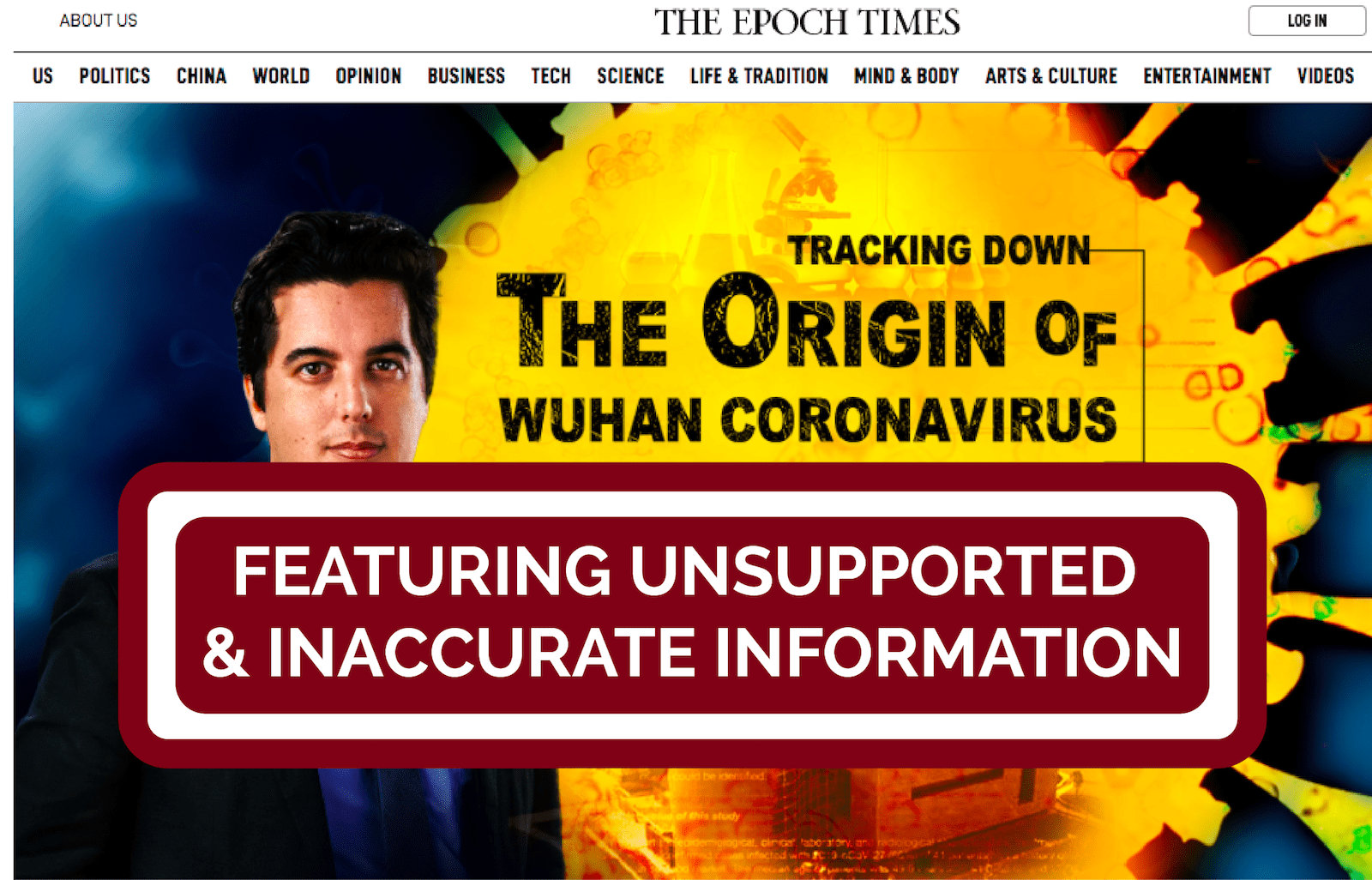 A video published by The Epoch Times@ on 7 April 2020 sparked widespread interest and gathered “70 million views” within weeks of its publication, according to the outlet. The video investigates the origin of SARS-CoV-2, the virus responsible for the COVID-19 pandemic. However, several of its core scientific claims are false and its facts, even when accurate, are often presented in a misleading way to support the main thesis of the video that the virus came from a Chinese research laboratory. The video argues that the pandemic could have resulted from the accidental or intentional release of either a natural virus under study or an artificial virus that was bioengineered (manmade). The video makes several scientific claims suggesting that the manmade hypothesis is likely. However, we found these claims to be unsupported by the available scientific literature or statements from scientists in the field, and to be contradicted by observations. The video fails to provide a plausible or complete argument to sustain the hypothesis that SARS-CoV-2 was engineered.

A substantial part of the movie is dedicated to showing that the virus did not first originate from the Wuhan market, as was proposed in the early stages of the epidemic. It is indeed true that fully one-third of the early cases did not present epidemiological links to the Wuhan seafood market, and it is totally possible that the market served merely as a place where propagation accelerated. This does not suggest, however, that the virus must have come from a lab instead. A recent phylogenetic analysis attempted to trace the origin of the virus[1], but its results are currently being debated within the scientific community%. Until a consensus is reached, the virus’ origin is still an active area of investigation.

From minute 12 onward, the video highlights a strong similarity between the S protein# of SARS-CoV-2 and the S protein of SARS-CoV-1, the virus responsible for the SARS outbreak in 2003-2005. The video argues that this is evidence that the virus could not have come from a natural reservoir. At 14’17”, former scientist Judy Mikovits& says: “the spike protein of the natural evolutionary strain doesn’t affect human cells at all. So that research has been going on in Wuhan and published since 2007 and clearly, if that spike protein from SARS weren’t on the COVID, the new COVID-19, or SARS-CoV-2, would be unable to enter human cells. This is again evidence that it couldn’t go through the Wuhan seafood market”.

The difference between SARS-CoV-2 and SARS-CoV-1 is even more striking in some specific parts of the S protein. In genetics, not all parts of a sequence have the same importance, and some amino acids of a given protein are crucial to allow the protein to work properly. In the case of the S protein, six amino acids have been shown to be crucial for the protein to bind to the receptor ACE2 of human cells and infect them. Importantly, the COVID-19 virus SARS-CoV-2 has exactly the same six amino acids as the pangolin coronavirus, and only one out of six with the SARS-CoV-1 S protein. This means that the SARS-COV-2 S protein is more closely related to coronaviruses infecting wildlife animals such as the pangolin than to the human-targeting SARS-CoV-1 and is more likely to have derived its ACE2-binding S protein from a wildlife coronavirus through a zoonotic episode than from the more distantly related human SARS-CoV-1.

From minute 24 onward, the video supports an erroneous claim about SARS-CoV-2 based on flawed and now retracted publications. At 24’40” it says: “2019-nCoV has four new sequences inserted, all of which can be found in HIV sequences […] There were only three viruses containing all the sequences. The first is the HIV virus itself, the second is a bat coronavirus discovered by Shi, and the third is this new Wuhan coronavirus […] Analysis of the SARS-2 COVID-19 apparently has genes that come from other human and other species, including some envelope [genes], the gp41, from HIV”.

This claim of HIV insertion has already been addressed by Health Feedback. Briefly, the small sequences, although appearing in HIV, are pretty common and can be encountered in numerous other viruses or even life forms[7,8]. In other words, the existence of these sequences in SARS-CoV-2 does not in any way mean it is linked to HIV, or that scientists would have purposely inserted HIV sequences into the SARS-CoV-2 genome. Furthermore, the video claims that these alleged HIV insertions are from the HIV protein gp41. However, the now-retracted preprint cited in the video identified these sequences in the HIV proteins gag and gp120. No mention is made in that preprint of gp41. Yet, the video does not present evidence that would support their claim of an insertion of specific sequences from gp41 in the S protein of SARS-CoV-2.

Lastly, the authors of the video suggest that the alleged presence of gp41 sequences in the S protein of SARS-CoV-2  may trigger immunodeficiency in patients. The fact that the additional sequences would result in a gain-of-function that gives HIV features to SARS-CoV-2 is absolutely unsupported by any scientific data or publications in the video.

In summary, the hypothesis that SARS-CoV-2 is a bioengineered virus released or leaked from a Wuhan research laboratory relies on scientific claims that are either unsupported or false. It ought to be noted, however, that this does not concern the hypothesis of a natural virus being studied and accidentally leaking, for example because of animal escape or infection of laboratory staff.

This article was reviewed for accuracy by Stanley Perlman, professor of microbiology and immunology at the University of Iowa.

%: A recent paper[1] in the Proceedings of the National Academy of Sciences suggests that patients infected with the most ancestral variant of the virus had no clear tie to the city of Wuhan and thus may have contracted the disease elsewhere[1]. This paper sparked harsh criticism from several experts in the field of evolutionary virology, indicating that this topic requires further study. [UPDATE 23 April 2020: We updated the article to indicate that the findings in the PNAS study have been challenged].

@: The Epoch Times (ET) has published numerous unsupported or inaccurate stories, several of which are listed here, and one which was covered previously by Health Feedback. ET was banned from advertising on Facebook in August 2019 after the social media platform found that ET had “obscured its connection to recent Facebook ads promoting President Trump and conspiracy content,” as stated by the New York Times. And in December 2019, Facebook announced having removed a network of accounts, Pages, and Groups for engaging in “coordinated inauthentic behavior” to promote content by U.S.-based media company The Beauty of Life (TheBL), which has since been banned from Facebook. ET has denied being linked “to the TheBL”. However, Facebook said: “Although the people behind this network attempted to conceal their identities and coordination, our investigation linked this activity to Epoch Media Group, a US-based media organization, and individuals in Vietnam working on its behalf.” This story was also covered by the New York Times, Graphika, and Snopes. [UPDATE (20 Apr. 2020): This note was updated to provide additional references, to add that ET denies being related to TheBL, and to clarify that the advertising ban and the network removal resulted from two separate violations of Facebook’s community standards.]

#: The S protein, or spike protein, is a protein inserted in the outer membrane of coronaviruses such as SARS-CoV-2. Working like a key in a lock, the protein binds to proteins presented on the surface of its host’s target cells and allows the virus to enter and infect the cells. The S protein’s amino acid composition and its three-dimensional structure dictates which receptor proteins it can bind to, and with what efficiency, ultimately determining the host species and types of tissues the virus can infect. The S protein’s receptor binding domain (RBD), and within it the receptor binding motif (RBM), are particularly crucial elements which determine the specific binding of the S protein to the target protein. In the case of SARS-CoV-2, and other coronaviruses such as SARS-CoV-1, the target receptor is the ACE2 protein located on the surface of target cells[9].

&: Judy Mikovits is one of two scientists interviewed in the video. She had actively published research on viruses (though not coronaviruses) prior to 2012. From 2006 to 2011, she was the director of the non-profit Whittemore Peterson Institute, a medical research institute affiliated with the University of Nevada, Reno. Jo Coen from Science reports that Mikovits was fired in September 2011 amid controversies about the reproducibility of her research.