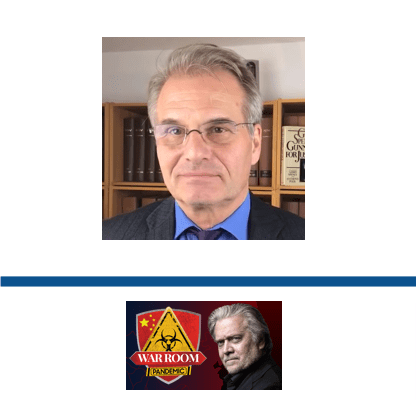 CLAIM
It’s not a corona pandemic but it’s a planned, staged PCR test pandemic
VERDICT more about the rating framework

DETAILS
Inaccurate: COVID-19 PCR tests are specific for SARS-CoV-2. A positive result in COVID-19 PCR tests indicates that the person is or has been infected specifically with this virus, although on its own it cannot tell us if the person is contagious.
Inadequate support: The video provided no evidence supporting the claim that the COVID-19 pandemic was planned. This claim was based solely on unverified testimonials and a 2019 preparedness exercise that simulated a pandemic.
KEY TAKE AWAY

COVID-19 is a real pandemic that has caused more than 545,000 excess deaths in the U.S. as of 17 June 2021. PCR tests are a very reliable tool to monitor the spread of the virus because they are highly specific for SARS-CoV-2 and detect tiny amounts of virus in infected individuals. Although no tests are 100% accurate, most positive COVID-19 PCR test results are true positives.

FULL CLAIM: "At this point, we believe this is not a real pandemic, rather this is a planned, staged pandemic. It’s not a corona pandemic but it’s a PCR test pandemic because that’s the only thing that underlies all of these activities, all these anti-corona measures"

On 10 June 2021, the podcast War Room: Pandemic, hosted by Steve Bannon, published this video interview with lawyer Reiner Fuellmich. First published on Facebook, the video was later removed, but it continued to circulate on other platforms like BrandNewTube.

Bannon was permanently suspended from Twitter in November 2020, after suggesting that certain U.S. officials like Anthony Fauci should be beheaded, a violation of the platform’s policies against the “glorification of violence”. YouTube later removed the podcast’s channel in January 2021 for violating the platform’s policies on misinformation.

During the 20-minute interview, Fuellmich repeated previously debunked conspiracy theories and inaccurate claims in support of his claim that the COVID-19 pandemic was planned since 2009. He also questioned the reliability of PCR testing, which he presented as a fabricated means to justify the public health measures put in place against the virus.

In the video, Fuellmich didn’t provide any evidence supporting his claims other than the alleged testimonies from “more than 110 scientists, economists, psychiatrists, psychologists, lawyers, and epidemiologists.” One of these testimonies comes from former Pfizer scientific advisor Michael Yeadon, who previously spread misinformation questioning the safety of COVID-19 vaccines and downplaying the effects of the pandemic.

Fuellmich cited one of Yeadon’s main claims that at least 97% of PCR tests are false positives because they use too many amplification cycles. This claim is inaccurate, as Health Feedback previously explained here, here, here, and here.

COVID-19 PCR tests detect the presence of SARS-CoV-2, the virus that causes COVID-19, by amplifying a small part of its genetic material. The number of amplification cycles needed to arrive at a threshold considered to be “positive” is also called the cycle threshold (Ct) value, which depends on the amount of virus present in a sample. The more virus present, the fewer amplification cycles are needed to reach the positive threshold.

Fuellmich claimed that “it is absolutely impossible for a PCR to detect infections”, because “it cannot distinguish between dead and live matter” and might detect “fragments or remnants of your body’s own immune systems fighting against the common flu or the cold”. This claim is also inaccurate, as Health Feedback pointed out in this review. COVID-19 PCR tests are designed to be highly specific for SARS-CoV-2, which means they can specifically detect this virus and differentiate it from any other virus or biological material.

In short, PCR tests specifically detect SARS-CoV-2 and positive results are largely true positives. A person’s viral load affects how contagious they are, but regardless of whether the person has a high or low viral load, a positive test indicates that the person is or has been infected with SARS-CoV-2, and is therefore a COVID-19 case.

Fuellmich’s claim that the COVID-19 pandemic isn’t real also doesn’t hold water when we simply compare the total number of deaths in 2020 and 2021 to that of previous years. A CDC Morbidity and Mortality Weekly Report report estimated that between late January 2020 and February 2021, there were more than 545,000 excess deaths in the U.S.[1]. This shows a clear increase in deaths coinciding with the first COVID-19 outbreak and the subsequent waves in the U.S. (Figure 1).

If Fuellmich’s claim was true, we wouldn’t see more people dying or hospitalized compared to previous years. The spike in excess deaths, as well as hospitalizations that threatened to overwhelm healthcare systems, can only be explained by the fact that there is a new disease spreading in the population. Put in simpler terms, we wouldn’t see more people get sick or die from a spate of false-positive PCR tests. Fuellmich’s claim clearly flies in the face of reality. 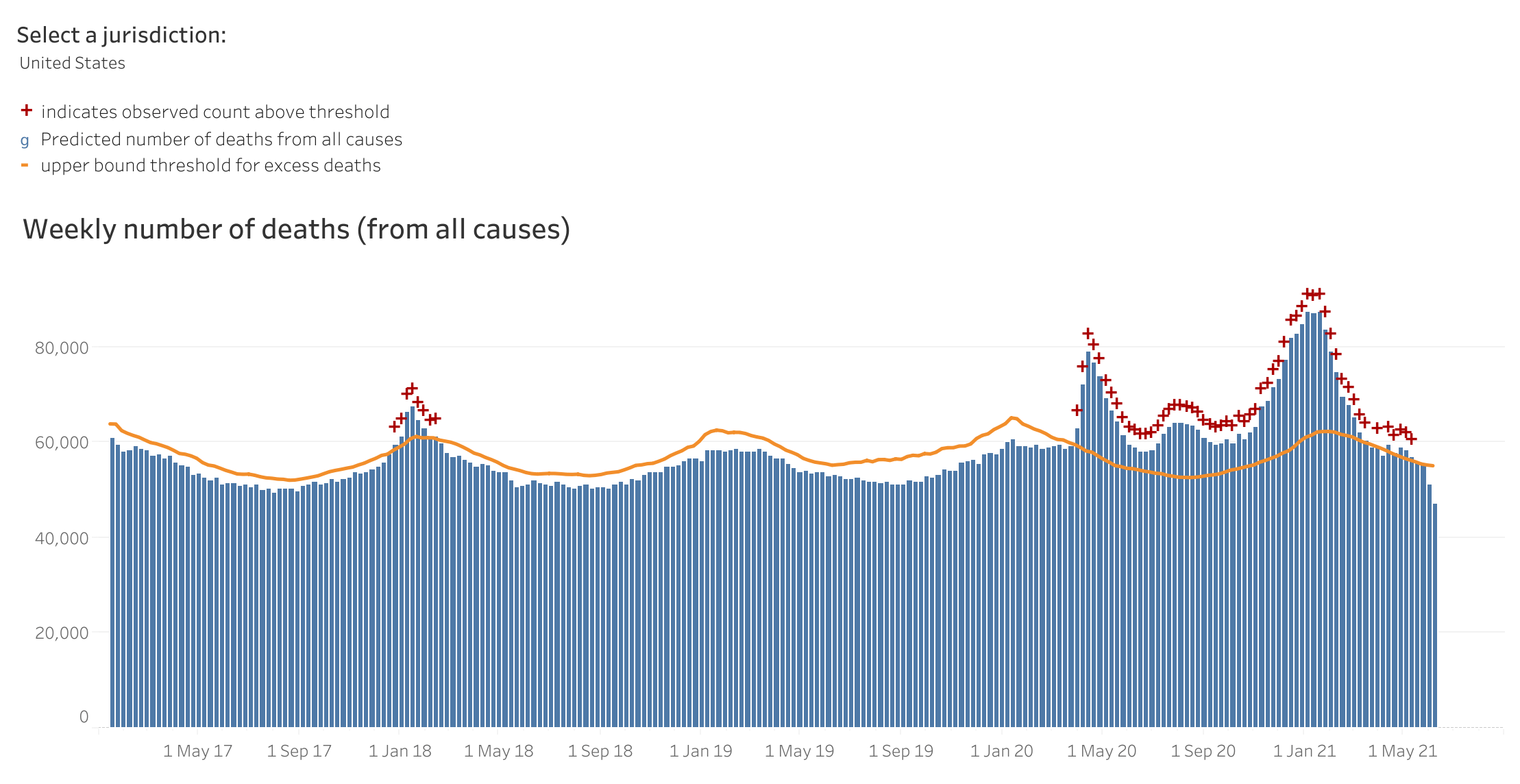 Figure 1. Number of deaths per week from May 2017 to May 2021. Blue bars above the orange line indicate the presence of excess deaths (marked with a red +). Data from the U.S. Centers for Disease Control and Prevention, retrieved on 17 June 2021.

The testimonies mentioned above from “more than 110” people like Yeadon, are also Fuellmich’s basis for claiming that the COVID-19 pandemic was planned. According to them, “everything started in fact with an accident at the Wuhan virology lab”, although this accident served simply as an opportunity to set into motion a plan previously orchestrated at Event 201.

The association between the COVID-19 outbreak and Event 201 was previously debunked by several fact-checkers, including PolitiFact, Full Fact, FactCheck.org, and Health Feedback. This event was a fictional pandemic preparedness exercise conducted on 18 October 2019 at the Johns Hopkins Center for Health Security, in collaboration with the Bill and Melinda Gates Foundation and the World Economic Forum. The goal of the exercise was to “illustrate areas where public/private partnerships will be necessary during the response to a severe pandemic in order to diminish large-scale economic and societal consequences.”

Because the event took place only a few months before the global COVID-19 outbreak started, it has been used to claim that public health officials had foreknowledge or were involved in the COVID-19 outbreak. The Johns Hopkins Center for Health Security clarified that the exercise involved no predictions and that the characteristics of the hypothetical virus didn’t resemble those of SARS-CoV-2:

“For the scenario, we modeled a fictional coronavirus pandemic, but we explicitly stated that it was not a prediction. Instead, the exercise served to highlight preparedness and response challenges that would likely arise in a very severe pandemic. We are not now predicting that the [SARS-CoV-2] outbreak will kill 65 million people. Although our tabletop exercise included a mock novel coronavirus, the inputs we used for modeling the potential impact of that fictional virus are not similar to [SARS-CoV-2].”

The hypothesis that SARS-CoV-2 leaked from a laboratory is unsupported at this stage as the virus’s origins are still a matter of debate. While the characteristics of the virus don’t suggest that it was manmade, there isn’t evidence for or against the scenario that a naturally occurring virus escaped the laboratory. This lack of evidence for the different hypotheses led scientists to publish this letter in Science calling for a “transparent, objective” investigation into the origins of the virus.

In summary, the high number of positive results in COVID-19 PCR tests is due to a high number of infected people, not the number of amplification cycles as Fuellmich claimed. Since the outbreak in early 2020, COVID-19 has caused more than 3,8 million deaths worldwide as of 17 June 2021. Nowhere does the stark reality of the COVID-19 pandemic more clearly assert itself than in the number of hospital beds occupied and lives lost since 2020.