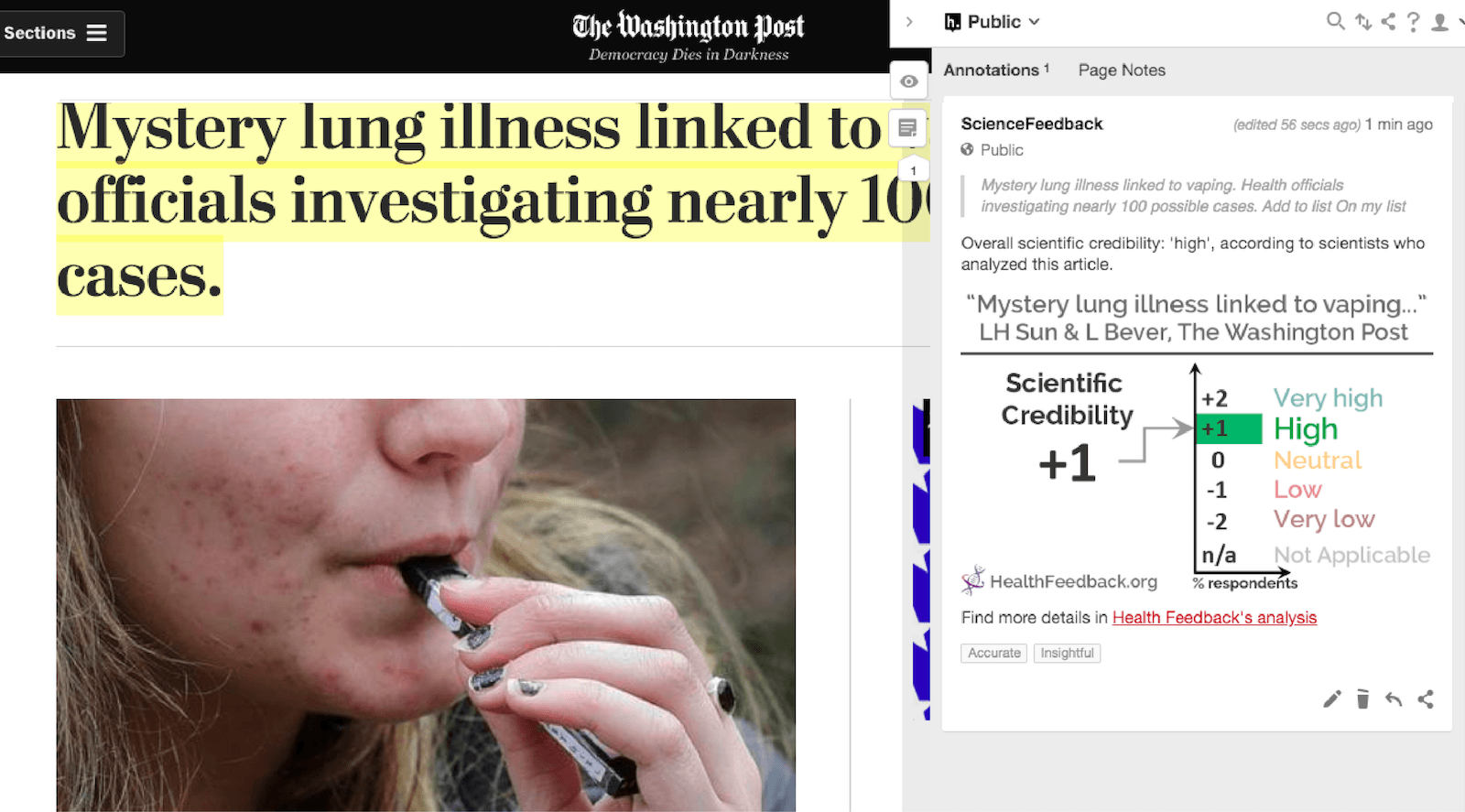 This article published in the Washington Post reports on the recent and sudden surge in vaping-related illnesses in the United States that have left many people hospitalized – notably many youth and young adults – and resulted in 6 fatalities to date. This story has been shared more than 83,000 times and is currently trending on Facebook. Other outlets such as NBC News, PBS, and the New York Times have also covered these developments.

E-cigarette smoking, more colloquially known as vaping, has been widely touted as a less harmful way of smoking and smoking cessation tool. Compared to traditional combustible cigarettes, much less is known about the long-term health effects of e-cigarettes (since e-cigarettes have been around for only about a decade). However, preliminary findings from recent studies suggest that while e-cigarettes might be less harmful than combustible cigarettes, they are not entirely harmless either[1,2,3]. This is of particular concern given the appeal of e-cigarettes among teenagers and the rise in the number of youth who smoke e-cigarettes (who would otherwise not be smoking at all). The true extent of long-term harm from e-cigarette smoking remains unclear.

Reviewers found the article on the whole to be accurate and insightful. All 3 reviewers concurred that the recent spate of illnesses are likely the result of e-cigarette use, and they were also clear on the fact that the exact chemical(s) which caused these ill-effects have yet to be definitively identified, a conclusion in agreement with health authorities and the clinicians quoted in the article.

The US Centers for Disease Control and Prevention has also published information on the recent increase in vaping-related lung illness.

You can read the original Washington Post article here.

Sukhwinder Sohal, Lecturer, School of Health Sciences, University of Tasmania:
The article is of high credibility with regards to generating awareness of vaping-related lung illness. However, some more evidence could have been provided as there are new studies available on the ill effects of these gadgets. There have been vaping-related deaths in United States, and many people have been hospitalized. The exact pathophysiological mechanism behind lung injury has not been confirmed yet. Further work is needed to identify the definitive causes.

We recently reported in a study published in European Respiratory Journal Open Research that IQOS and electronic cigarettes are both potentially injurious to lung health by affecting both airway epithelial and smooth muscle cells in an in vitro study[4]. These may explain shortness of breath, cough and inflammation. We further reported deeper cell injury mechanisms such as mitochondrial dysfunction and potential epithelial mesenchymal transition. These findings warrant further investigation.

Martin Chaumont, Physician, Department of Cardiology, Erasme University Hospital:
At the moment, it is not possible to know if these pulmonary diseases are related to propylene glycol, glycerol, nicotine, flavorings, or more likely, synthetic/natural drugs sometimes added to e-liquids. Although vaping (propylene glycol with or without glycerol and/or nicotine) has deleterious effects on the lungs[5], e-cigarette vaping has been shown to be safe for over 10 years now[6]. It therefore seems odd to observe this new epidemic of life-threatening lung diseases among users. Inhalation of vehicles (e.g. propylene glycol and glycerol) seems relatively harmless (with some side effects certainly, but without “mortal danger”). Nicotine is highly addictive but this is another issue entirely[6].

I firmly believe that this new epidemic is linked to synthetic cannabinoids, which unfortunately could be popular among young people[7]. These new synthetic cannabinoids are completely unknown, understudied and very diverse in their composition. Besides, an article published on September 2019 in the New England Journal of Medicine reported that “a total of 84% of these patients reported having used tetrahydrocannabinol (THC) products in e-cigarette devices, although a wide variety of products and devices was reported.”[8]

In conclusion, this article by Washington Post is useful and does not provide misleading information, although it might be worth mentioning that the case description of Dylan Nelson of Burlington seems unnecessarily alarming.

Isaac K Sundar, Assistant Professor (Department of Environmental Medicine), University of Rochester Medical Center:
Based on the evidence they collected from the patients who were hospitalized, it is clear that they were affected by some vaping-related products. But the article failed to provide the exact details on which product and what is added to that which causes sudden acute lung injury. It is more likely due to CBD and THC-related products added to vape juices without nicotine which, at a higher concentration and when inhaled directly into the lungs, result in such serious illness in young and middle-aged adults.

We previously reviewed a Daily Mail article claiming that “while e-cigarettes may have milder effects on the lungs, they are just as bad – if not worse – for the cardiovascular system” – the claim was found to be partially correct.