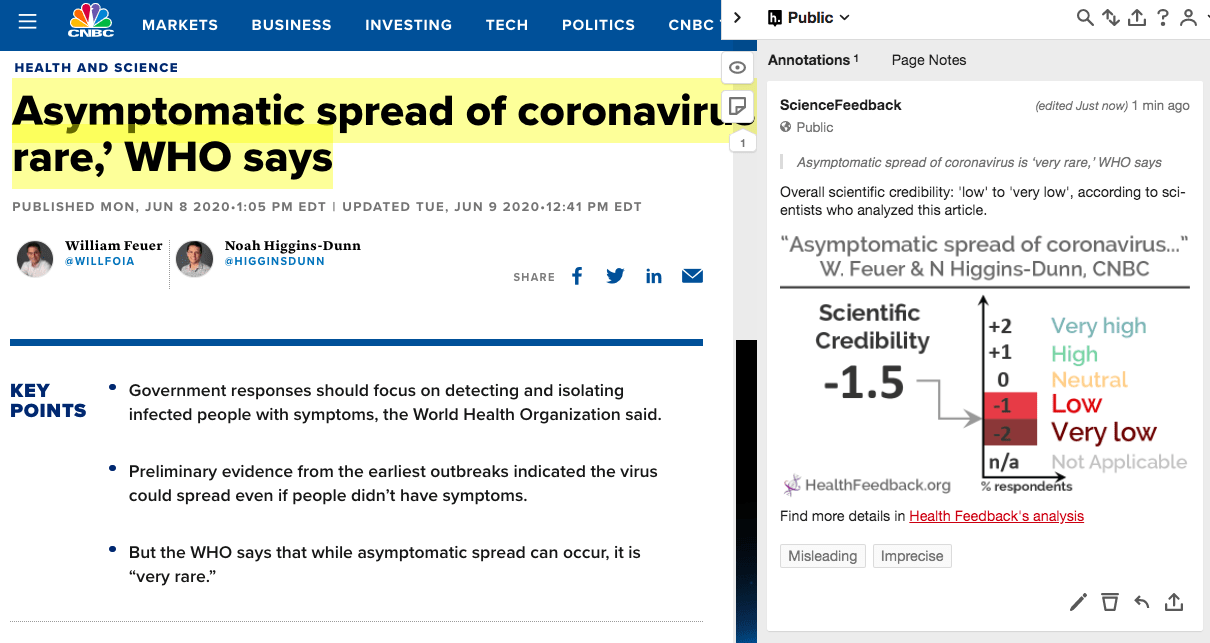 This article by CNBC, published on 8 June 2020, reported comments by the World Health Organization (WHO) regarding the significance of asymptomatic COVID-19 transmission. As of 10 June, it has received more than 230,000 shares on Facebook and more than 1.8 million user interactions on the platform. Its spread has been assisted by many Facebook groups which oppose physical distancing and/or promote health misinformation.

Specifically, the WHO stated that asymptomatic spread is “very rare”, which was then reported by CNBC as “Coronavirus patients without symptoms aren’t driving the spread of the virus.” These statements have been interpreted by some media outlets and the general public to mean that people who are infected but remain healthy are unlikely to spread COVID-19 to others. This has in turn been viewed as an admission that physical distancing and lockdowns are unnecessary, along with the economic and social tolls these measures exacted, since such measures were implemented due to concerns about virus transmission by seemingly healthy people. Other measures, such as the use of face masks and coverings, have similarly been panned for the same reason.

Scientists told Health Feedback that the statements by the WHO and the reporting by CNBC were misleading and imprecise. Scientifically, the term “asymptomatic” refers to people who never develop any symptoms at all during infection, which is the definition used by the WHO, explained Nina Fefferman, a professor at the University of Tennessee who specializes in epidemiology and evolutionary biology. However, non-scientists generally understand “asymptomatic” to mean people who are not obviously ill with COVID-19 related symptoms.

As such, individuals who do not show symptoms initially (presymptomatic) or who show only a few symptoms (paucisymptomatic) would fall under a layperson’s definition of “asymptomatic”, whereas such cases would not be considered asymptomatic according to the scientific definition which the WHO uses. The mismatched definitions and lack of clarity have resulted in miscommunication.

Indeed, Marm Kilpatrick, an assistant professor at the University of California Santa Cruz who studies disease ecology, underscored the fact that there is already “abundant data” showing that people who are not showing symptoms—which could include asymptomatic, presymptomatic, and paucisymptomatic individuals—comprise about 40 to 50% of COVID-19 cases detected through testing, as a review by Oran and Topol shows[1]. The U.S. Centers for Disease Control and Prevention has also estimated that about 40% of COVID-19 transmission occurs before onset of symptoms. In short, people who do not show symptoms can be a significant source of transmission.

Therefore, physical distancing measures and use of face masks remain a scientifically justified means of reducing the spread of the disease. “It is entirely wrong to interpret the WHO announcement as a criticism of efforts to limit spread from seemingly healthy people who may transmit the virus to others,” Fefferman said.

Since there is still uncertainty over the infectivity of asymptomatic people and bias in the methodology of studies using contact tracing, there is insufficient evidence for the WHO to make this claim regarding asymptomatic transmission. “Given the confusion between the definitions of pre-symptomatic and truly asymptomatic, it’s a misleading PR disaster,” Kilpatrick said.

Although the WHO quickly issued a clarification a day after the CNBC article was published, the miscommunication has already spawned numerous viral articles and posts on social media, which erroneously claim that the WHO’s earlier statements prove that physical distancing and face masks are unjustified.

In her clarification, WHO official Dr. Maria Van Kerkhove said:

“What I was referring to yesterday in the press conference were a very few studies, some two or three studies, that have been published that actually try to follow asymptomatic cases, so people who are infected over time, and then look at all of their contacts and see how many additional people were infected. And that’s a very small subset of studies. I was responding to a question at the press conference, I wasn’t stating a policy of WHO or anything like that. I was just trying to articulate what we know. I used the phrase ‘very rare,’ and I think that that’s misunderstanding to state that asymptomatic transmission globally is very rare. What I was referring to was a subset of studies.”

You can read the original CNBC article here.

NOTE (11 Jun. 2020):
After our evaluation was published, CNBC updated its article to include a more complete explanation that distinguishes asymptomatic transmission from pre-symptomatic transmission, and provided additional information regarding the importance of social distancing and use of face masks/coverings. The updated article can be found here.

Nina Fefferman, Professor, Department of Mathematics, University of Tennessee, Knoxville:
This is more the fault of the WHO than the reporting, but the reporting about the WHO conclusion misinterprets the WHO findings. The WHO narrowly defines “asymptomatic” to mean “never develops any symptoms at all, during the entire course of being infected”. This is not how the public (or the press) interpret “asymptomatic” – instead, the more common interpretation is about whether or not people who are not obviously ill with COVID-19 related symptoms can spread the infection. The WHO data says they CAN, but calls these people “presymptomatic” or else “paucisymptomatic”, meaning presenting few or unusual symptoms. This has VERY different epidemiological importance and it is entirely wrong to interpret the WHO announcement as a criticism of efforts to limit spread from seemingly healthy people who may transmit the virus to others. Those efforts are important and the WHO announcement does not address them directly.

A. Marm Kilpatrick, Professor, Department of Ecology and Evolutionary Biology, University of California Santa Cruz:
[The following comment was transcribed from Dr. Kilpatrick’s Twitter thread; it has been lightly edited for clarity.]
Early in the epidemic, there were questions about whether people without symptoms could spread the disease. This is critically important and fundamentally determines whether quarantining based on symptoms will be effective. See a fantastic paper on this by Fraser et al[2].

This question is not answered and some studies have shown evidence in support of asymptomatic cases being equally infectious as symptomatic ones, whereas others show milder cases to be less infectious. Here’s a study supporting each case[6,7].

The bigger problem is that contact tracing studies are flawed due to the delays between the time of infection and testing. When a person is tested, they usually have had at least mild symptoms for several days and were infected ~5.5 days before that[8].

As a result, the person that infected them was infectious 8 – 11 days ago. If that person was asymptomatic, there’s a moderate chance they would test negative when traced; unfortunately we don’t know the exact probability of that, as discussed in the thread below:

Protestors&others: A negative test for COVID-19 does NOT RULE OUT INFECTION if you don't have symptoms (& it's not 100% accurate even if you do). Let me explain 1 of the giant unknowns for testing for COVID-19/SARS-COV-2 that impacts so many things. Discussed w/ @CT_Bergstrom

Data from symptomatic people by Borremans et al. suggest that this probability could be high; ten days after symptom onset, 30% of infected people test negative by swab[9].

It could be higher for asymptomatic people, and even if this is not the case, one could mis-attribute transmission due to delay. For symptomatic people you’d attribute them to be an infector based on the date of onset of symptoms (all studies I know of use an earlier onset date to identify infector vs. infectee).

Given the uncertainty in infectiousness and bias in contact tracing methodology, there is insufficient evidence for the World Health Organization to make this claim for asymptomatic transmission and given the confusion between the definitions of “pre-symptomatic” and truly “asymptomatic”, it’s a misleading PR disaster.

These articles by Forbes and NPR discussed the challenges of tackling silent COVID-19 transmission, both of which are careful to define and explain differences between asymptomatic and pre-symptomatic individuals.