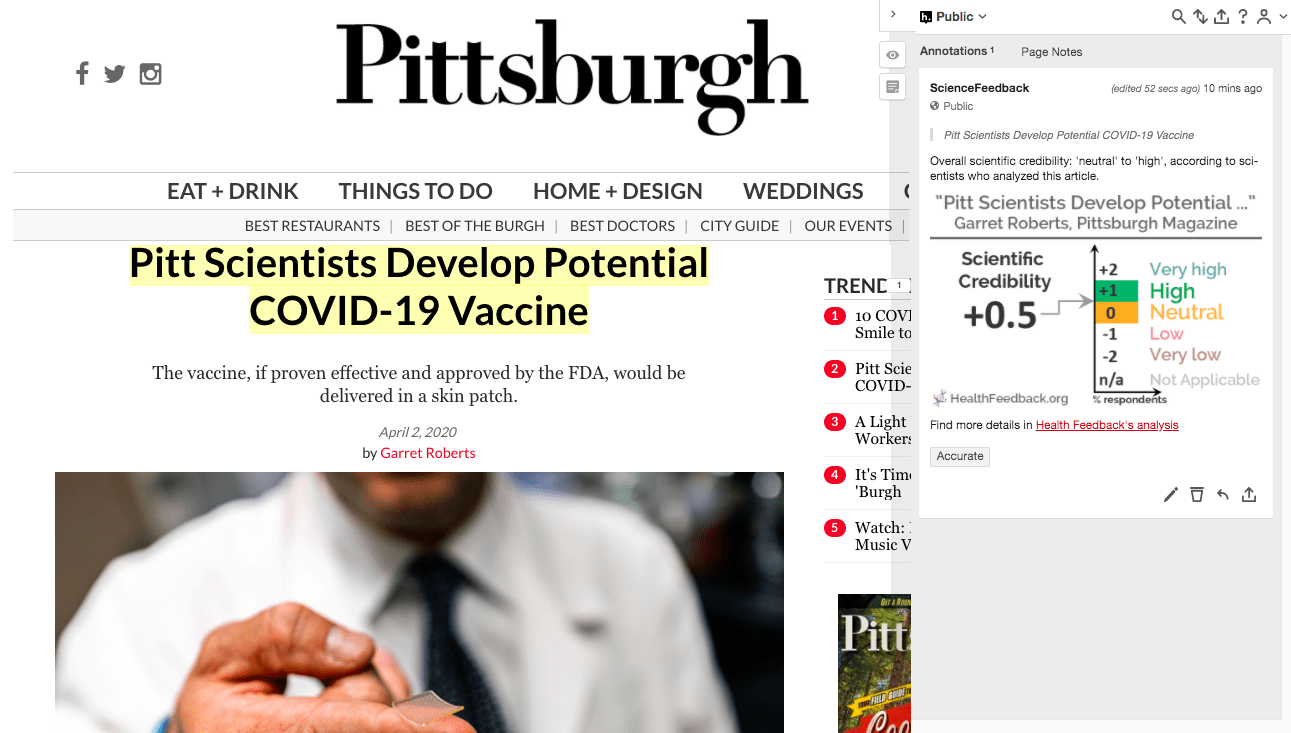 A Pittsburgh Magazine article reports that University of Pittsburgh scientists have developed a COVID-19 vaccine candidate, which is delivered through a novel “microneedle array”, a skin patch that carries many tiny needles loaded with the vaccine. The needles, which are made of a type of sugar, can then dissolve in the skin and release the vaccine into the body. The article was published on 2 April 2020 and went viral on Facebook within a day. It has received more than 530,000 views on Facebook to date. Reports of this scientific work have also been published in many other outlets, including Reuters, The Independent, and the New York Post. These news reports are based on a pre-clinical study published online in the journal EBioMedicine on 1 April 2020[1].

In this pre-clinical study, scientists generated a recombinant form of the spike protein found on SARS-CoV-2, the causative agent of COVID-19, based on previous knowledge from their work on the coronaviruses that cause severe acute respiratory syndrome (SARS) and Middle East Respiratory Syndrome (MERS). This recombinant spike protein was loaded into a dissolvable microneedle array, which is applied as a skin patch. The researchers were able to show that this novel mode of vaccine delivery, which can be produced quickly and is more cost-effective than traditional methods, elicited a high level of antibody production in mice, demonstrating its feasibility and potential in vaccine development for COVID-19 as well as other diseases.

Scientists who reviewed this article’s scientific credibility found that the reporting was generally accurate. However, they also highlighted a missed opportunity to provide readers with more information to place the research findings in context. Ian Frazer, immunologist and professor at the University of Queensland, pointed out that the article “assumes that an immune response in mice would equate to protection of humans against viral infection, but there are many examples where that is not the case”[2,3,4].

To find out if this vaccine candidate is indeed protective, it will need to be tested in humans during clinical trials, which is a potentially lengthy undertaking. “The reader would be better informed if the article clarified that the clinical testing phase will still take in the region of 12-18 months,” said Leigh Jones, Head of Training at the Oxford University’s Clinical Research Unit. “And even this is a conservative estimate with no guarantee of translation from animal models to clinical use in humans.” The figure below explains the scope of each phase of clinical trials in vaccine development. 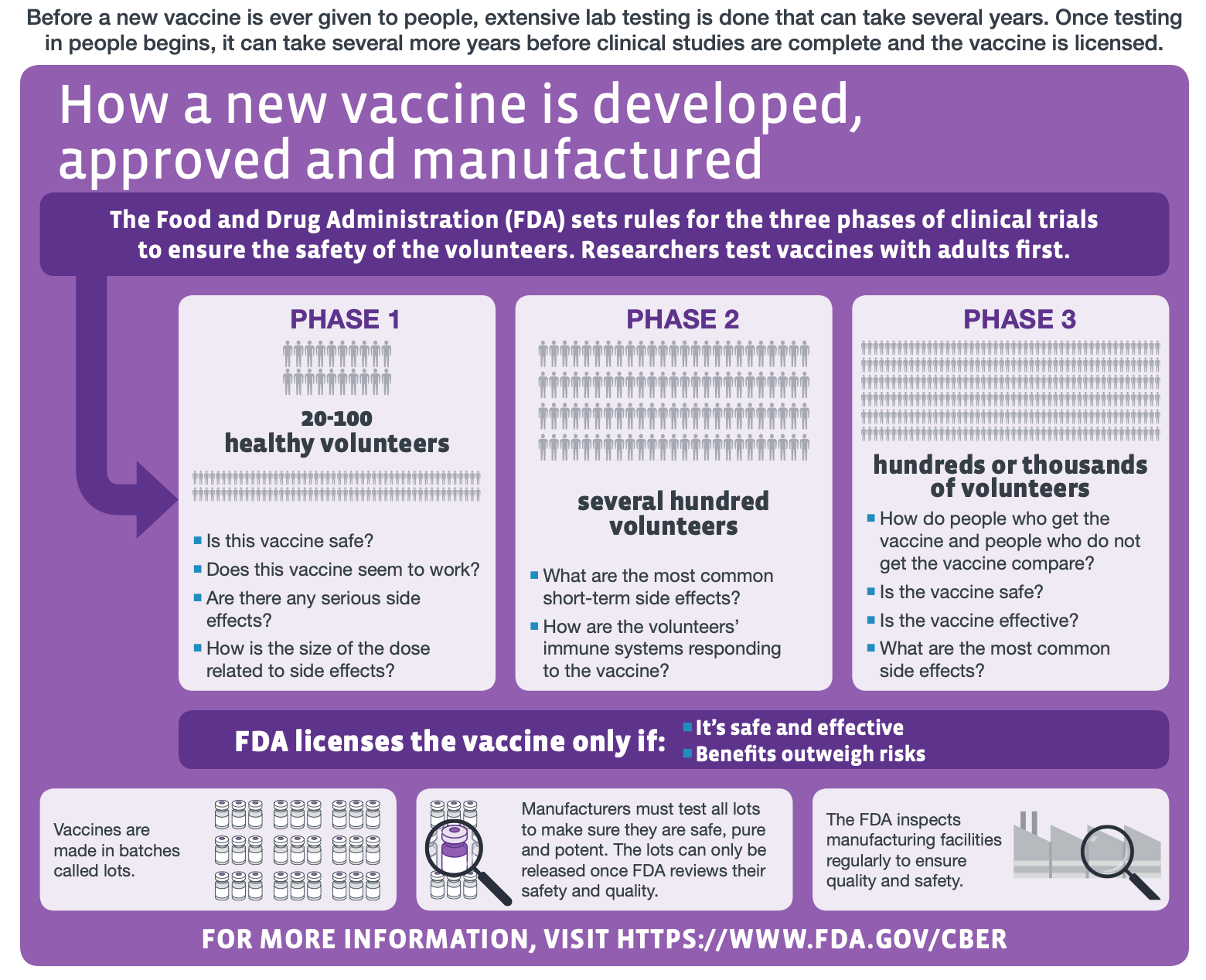 On the other hand, Jones also stated that the study provides “an exciting development and shows a proof of concept to create such vaccines quickly for pre-clinical (animal) testing which will save valuable time in such pandemic situations,” highlighting that the rapid development of this vaccine candidate was possible due to the Pittsburgh researchers’ earlier work on SARS and MERS.

As Andrea Gambotto, associate professor at the University of Pittsburgh and one of the study’s senior authors, explained in this Reuters article: “These two viruses, which are closely related to SARS-CoV-2 (the new coronavirus causing the COVID-19 pandemic), teach us that a particular protein, called a spike protein, is important for inducing immunity against the virus.”

Indeed, the recombinant spike protein designed by the researchers in the published study was able to elicit high levels of antibody production in mice, as measured by serological tests. Whether humans will exhibit the same response remains to be determined in clinical trials.

The authors of the study also cautioned that it is still not clear whether the antibodies induced by the vaccine candidate are neutralizing. The body produces many types of antibodies against a single pathogen, but not all are capable of preventing viral infection. Antibodies that are able to do so are called neutralizing antibodies. This article on the Virology Blog, run by Vincent Racaniello, a virologist and professor at Columbia University, explains in greater detail the differences between neutralizing and non-neutralizing antibodies, as well as their biological significance.

In addition to ensuring that a vaccine candidate provides protection, this PNAS news article, published on 30 March 2020, describes other obstacles expected in COVID-19 vaccine development, particularly safety. Based on past experience in vaccine development against SARS and other diseases, scientists found that certain vaccine candidates instead led to more severe disease due to immune complications.

“You really have to test a vaccine carefully, and not just roll it out because people are clamoring for it with an epidemic underway,” said Marc Lipsitch, an epidemiologist at the Harvard T.H. Chan School of Public Health, in the article.

You can read the original Pittsburgh Magazine article here.

Ian Frazer, Professor, Faculty of Medicine, University of Queensland:
The article assumes that an immune response in mice would equate to protection of humans against viral infection, but there are many examples where that is not the case[2,3,4]. It does not point out that there are animal models of SARS-CoV-2 infection in ferrets[5,6] that could and should be done before human trials.

Leigh Jones, Head of Training, Oxford University Clinical Research Unit:
The article provides a short summary of an interesting pre-clinical study recently published in the journal EBioMedicine from researchers at the University of Pittsburgh. The paper reports promising data from animal trials of a candidate SARS-CoV-2 vaccine via a new delivery method of micro-needle delivery which may increase immunogenicity. The team were able to quickly mobilise and produce this candidate following their previous experience with a potential MERS vaccine. This is an exciting development and shows a proof of concept to create such vaccines quickly for pre-clinical (animal) testing which will save valuable time in such pandemic situations.

However, the news article lacks context in that it does not put this discovery into the overall time-frame of the vaccine development pipeline. The point at getting to the stage of vaccine trials is one of a series of milestones taking months to years. The reader would be better informed if the article clarified that the clinical testing phase will still take in the region of 12-18 months, and even this is a conservative estimate with no guarantee of translation from animal models to clinical use in humans.