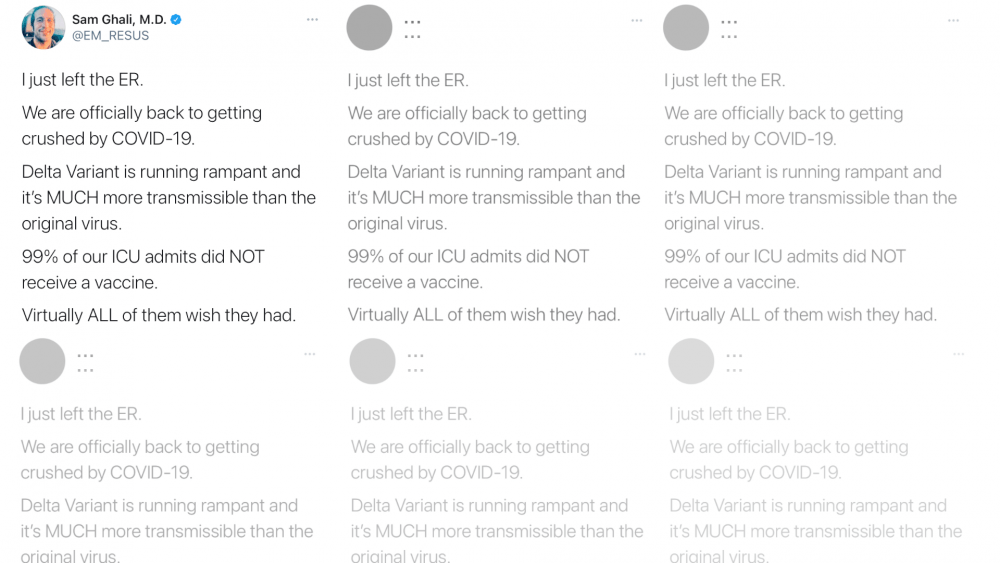 The spread of the Delta variant of SARS-CoV-2 has put many countries back on high alert. Both the U.S. and the U.K. have seen the Delta variant become the predominant cause of COVID-19 cases. However, one thing is clear: the COVID-19 vaccines authorized for use in the U.S. remain highly effective even against the Delta variant. In the U.S., more than 99% of COVID-19 hospitalizations and deaths were documented in unvaccinated people. And as this earlier Health Feedback review explained, case increases are occurring notably in states with low vaccine coverage.

Public health agencies and medical experts have thus been calling for people to get vaccinated. One such expert was Sam Ghali, an assistant professor at the University of Florida specializing in emergency medicine, who tweeted on 22 July 2021 to emphasize the importance of vaccinating against COVID-19:

Just to give you some better insight into what is actually happening right now, we currently have MORE patients admitted to the hospital with COVID-19 than we’ve had at ANY other time since the pandemic began.

Curiously, Ghali’s tweet became the subject of a copypasta on Twitter. “Copypasta” is Internet slang for a block of text that is directly copied and pasted many times across social media platforms and or message boards. In this sense, it is reminiscent of the practice of sending chain emails in the 90s.

Reactions to the copypasta

The appearance of multiple identical messages posted by different users on Twitter didn’t go unnoticed. Some users began to document these instances and post screenshots showing multiple tweets from different accounts all containing the same text in Ghali’s tweet (see examples below). By lining up these identical tweets next to each other with that of Ghali’s, the overall effect suggested bot activity, and these screenshots indeed led to questions about whether Ghali was simply part of a bot operation.

As the copypasta lent the false impression that Ghali’s tweet was part of bot activity, it led some to conclude that his information must therefore be inauthentic. Thus the copypasta provided grounds for some to imply that the epidemiological situation in Jacksonville wasn’t as bad as Ghali’s tweet made it out to be. In other words, these people believed that the copypasta was one more reason why the Delta variant didn’t need to be taken seriously as a public health threat. It also led to attacks on Ghali, with some accusing him of lying (see below).

The confusion sown by the copypasta didn’t confine itself solely to Twitter. Social media posts on other platforms containing screenshots of the copypasta, such as this Instagram post by entrepreneur Mike Dillard and this post by the Facebook page Occupy Democrats Logic, went viral on their respective platforms. Such screenshots were also shared on a Telegram channel for the far-right group 1st Amendment Praetorian, as shown in this screenshot here.

The websites Twitchy and PJ Media also published articles about the copypasta, similarly casting doubt over the authenticity of Ghali’s tweet, and by association, the severity of the pandemic. According to Media Bias/Fact Check, Twitchy is “an American Twitter curation and news website founded by conservative commentator Michelle Malkin in 2012”. Its record on factual reporting is listed as Mixed. PJ Media has been classified as a Questionable source.

Ascertaining Ghali’s report of the epidemiological situation in the ICU

Based on his academic profile on the University of Florida (UF) website, we can see that Ghali practices at UF emergency rooms in Jacksonville, Florida.

On a state level, the Johns Hopkins University’s Coronavirus Resource Center reported that the daily number of new cases in the state of Florida has been on the rise for at least the past two weeks. The Center also reported that bed occupancy in intensive care units (ICU) had risen from 79% two weeks ago to 83% last week, mainly due to an influx of COVID-19 patients. Furthermore, just over 49% of Florida’s total population has been fully vaccinated.

The New York Times reported on 28 July 2021 that there was a 123% increase in the number of hospitalizations and a 44% increase in COVID-19 deaths in Florida compared to two weeks ago.

Regarding the epidemiological situation in Jacksonville specifically, this map for example showed Jacksonville as the primary COVID-19 hotspot in the state. 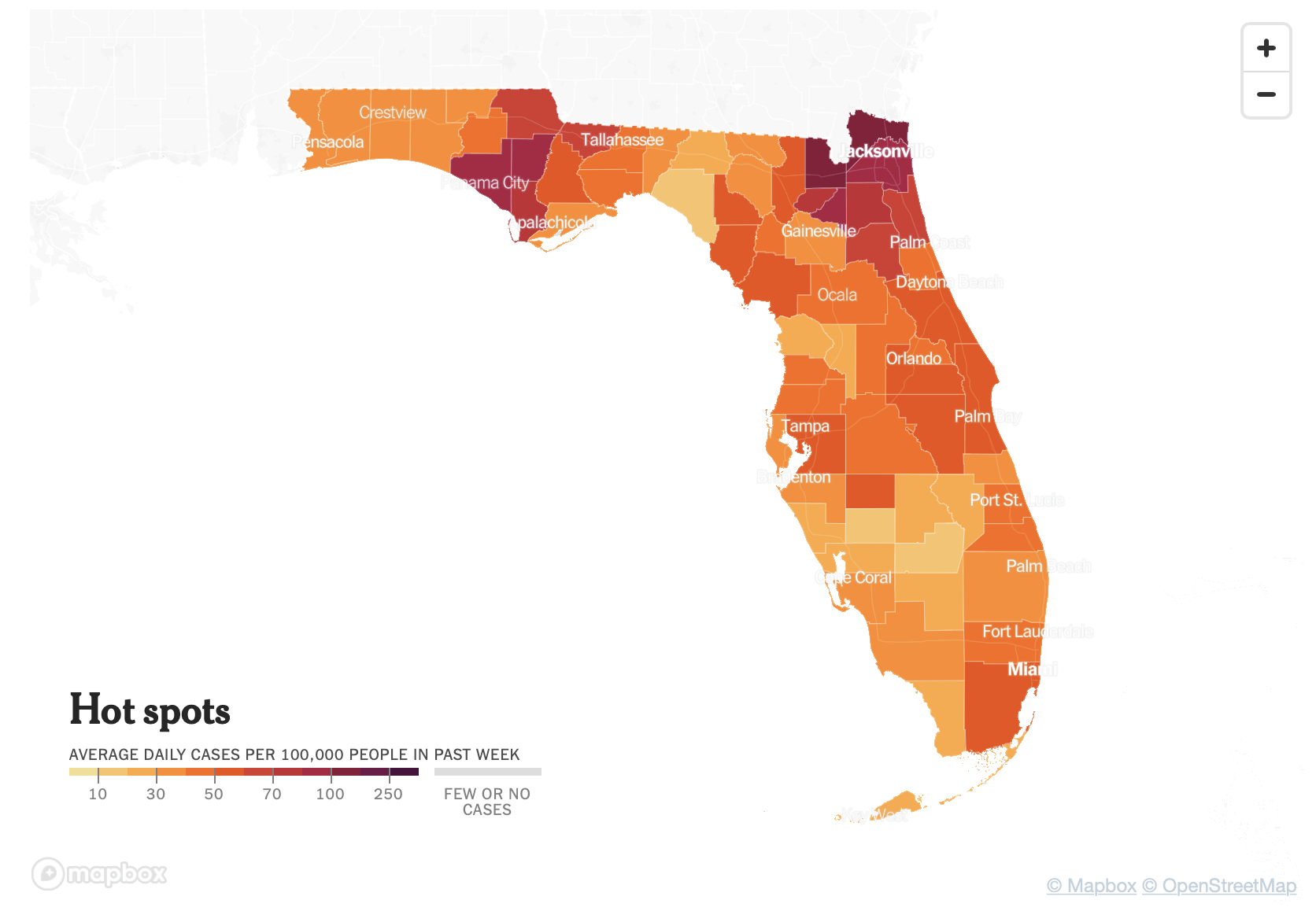 Chad Neilsen, the director of infection prevention at UF Health Jacksonville, also told News4Jax that “Staffing becomes a real issue for us […] We have people holding down in the emergency department because we either don’t have staffing in the beds upstairs for them or we don’t have room for them elsewhere.”

A news report by First Coast News on 20 July 2021 stated that “Many of those now being hospitalized with COVID-19 are those who are not vaccinated”.

On the whole, the publicly available information about the state of Florida, and Jacksonville specifically, points to a deteriorating epidemiological situation, corroborating Ghali’s tweet. We were unable to specifically verify the figure of 99% COVID-19 ICU admits who were unvaccinated, as given by Ghali, but we do know at least that the majority of COVID-19 hospital patients were unvaccinated.

Exploring motivations for the copypasta

The COVID-19 pandemic has gone hand-in-hand with an infodemic, defined by the World Health Organization as “an overabundance of information, both online and offline”:

“It includes deliberate attempts to disseminate wrong information to undermine the public health response and advance alternative agendas of groups or individuals. Mis- and disinformation can be harmful to people’s physical and mental health; increase stigmatization; threaten precious health gains; and lead to poor observance of public health measures, thus reducing their effectiveness and endangering countries’ ability to stop the pandemic.”

Indeed, the one and a half years of the pandemic has seen the fact-checking community documenting thousands of instances of misinformation through the International Fact-Checking Network’s CoronaVirusFacts Alliance.

One common theme of misinformation revolves around doubt over the severity of the pandemic. The spread of COVID-19 has dictated the implementation of public health restrictions, such as mask-wearing, physical distancing, school closures, and lockdowns. These restrictions are also opposed by certain segments of society.

Put simply, by fomenting false or misleading narratives that downplay the severity of the pandemic—such as by suggesting that there aren’t actually as many cases or deaths as reported—it allows one to call into question the necessity of such restrictions and provide support for calls to remove these restrictions.

Misinformation is commonly understood as false or misleading information. But the copypasta of Ghali’s tweet demonstrates that one doesn’t need to spread false or misleading information in order to spread a false narrative about the severity of the pandemic. In the case of the copypasta, the false narrative was manufactured by the appearance of bot-like behavior, the result of many Twitter users copy-pasting a genuine message by a doctor, regardless of whether these users’ intent was to generate the appearance of bot-like behaviour. 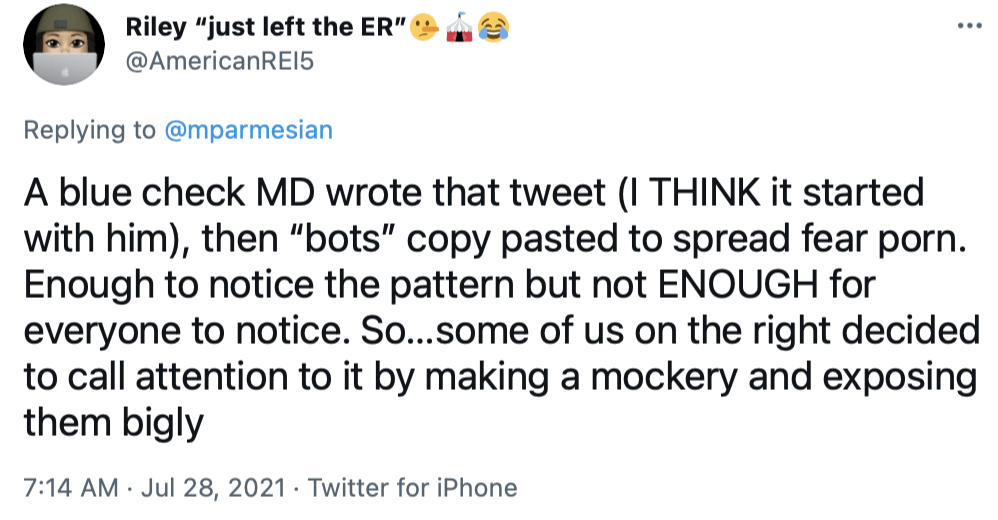 While the true motivations of the individual Twitter users who participated in the copypasta cannot be directly confirmed, their Twitter handle, profile picture, and reaction to the aftermath of the copypasta can provide us with clues to help us infer their reasons for joining in.

Some users exhibited characteristics associated with far-right and white nationalist groups, which have also been hotbeds of COVID-19 and vaccine skepticism. For instance, the word “Groyper” can be seen in the handle of one user (GroyperAccount). According to the Anti-Defamation League, the term “Groyper” is used by individuals to identify themselves as supporters of white supremacist Nick Fuentes. GroyperAccount also sports an image of Pepe the Frog as its profile picture, another icon that has come to be associated with far-right and white supremacist groups.

The user AmericaREI5 claimed that the copypasta was “a way to show people how easy it is to be fooled by a partial screenshot, video clip w/ no context, etc”.

To a tweet posting screenshots of the copypasta, three users that had participated responded with the following: 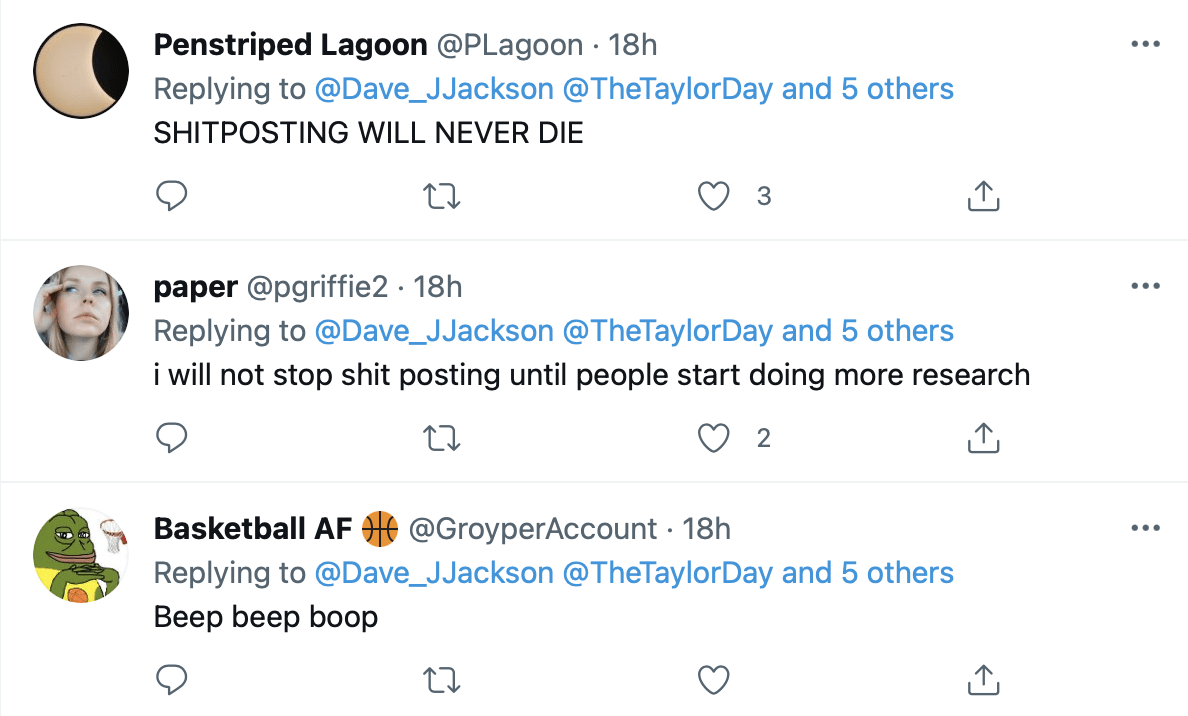 Shitposting is, as Robert Evans wrote on Bellingcat:

“[T]he act of throwing out huge amounts of content, most of it ironic, low-quality trolling, for the purpose of provoking an emotional reaction in less Internet-savvy viewers. The ultimate goal is to derail productive discussion and distract readers.”

Political commentator and activist Julia Song, who goes by the Twitter handle realjuliasong and is another participant in the copypasta, put it more bluntly:

This incident illustrates how manipulating the emotions of online audiences can be achieved with relatively unsophisticated techniques such as the copypasta, that also requires relatively little effort to apply—particularly in an audience that is already vulnerable to such manipulation, thanks to misinformation and a prior belief in conspiracy theories.

By manufacturing the appearance of bot-like behaviour through copypasta, Twitter users were able to sow confusion and discredit a frontline doctor’s tweet that highlighted the danger the Delta variant posed for unvaccinated individuals. And by thus falsely associating a warning about the Delta variant with less-than-aboveboard behavior, it also gave some online users the opportunity to discredit any warnings about COVID-19 as simply part of a disinformation campaign.

As was amply demonstrated by numerous responses to Ghali’s own tweet, the copypasta seeded doubt and reinforced distrust of and hostility towards medical professionals and public health agencies working to counteract the effects of the pandemic. Such sentiments manifest as harassment and attacks on frontline healthcare professionals and scientists correcting COVID-19 misinformation.

But still, one immutable fact remains: all the efforts to downplay the public health threat posed by COVID-19 will not fill the absence created by the deaths of more than 600,000 people due to COVID-19 in the country.