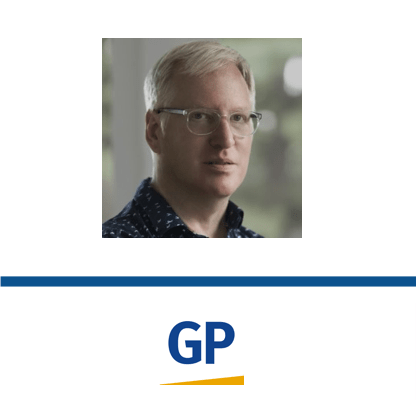 DETAILS
Unsupported: Clinical trials didn’t show a clear benefit of ivermectin in reducing COVID-19 severity, hospitalization rate, or mortality. Epidemiological evidence also doesn’t indicate that ivermectin helped curb the number of COVID-19 cases and deaths in Indonesia or in other countries. However, these countries implemented other measures that have proven effective in limiting the spread of the virus, including vaccination and restrictions, which likely contributed to the decline in COVID-19 cases.
KEY TAKE AWAY

Despite the lack of evidence supporting a benefit of ivermectin in COVID-19 patients, many countries have promoted its use to fight the pandemic. So far, no reliable studies have provided evidence showing that ivermectin is effective against COVID-19. Furthermore, ivermectin recommendations are generally accompanied by other measures, including vaccination and restrictions. Studies have shown that such measures are effective at limiting the spread of the virus, making it more difficult to determine whether ivermectin has any beneficial effect.

FULL CLAIM: "Ivermectin played a role on the steep decline of COVID-19 cases" in Indonesia

Between July and August 2021, Indonesia experienced a second surge in COVID-19 cases that caused over 50,000 deaths in the country. National Geographic reported that Indonesia had become a new major epicenter of the COVID-19 pandemic, mainly due to the spread of the more contagious Delta variant and a low vaccine coverage. As of 1 July 2021, only 11% of the Indonesian population had received at least one dose of the vaccine (Figure 1) and 5% were fully vaccinated. 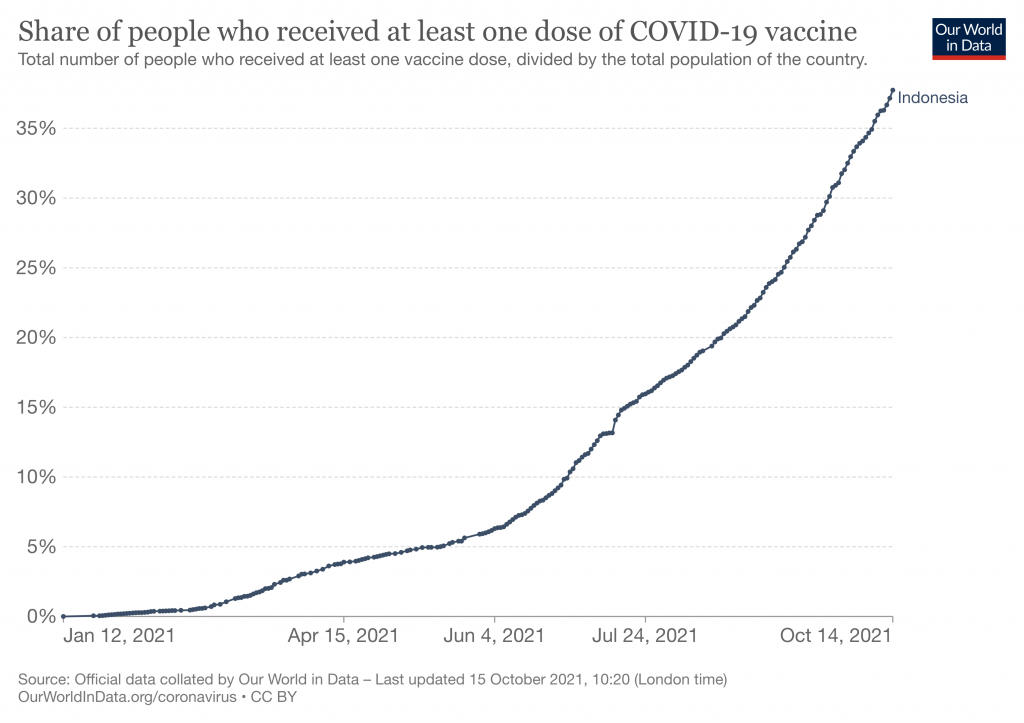 Figure 1. Percentage of the Indonesian population that received at least one dose of a COVID-19 vaccine since the beginning of the country’s vaccination campaign on 12 January 2021. Data and image retrieved from Our World in Data on 14 October 2021.

COVID-19 cases in Indonesia increased rapidly, followed by a sharp decline two months later (Figure 2), similar to what happened during the second COVID-19 wave in India between March and May 2021. On 9 October 2021, Gateway Pundit published an article titled “COVID-19 cases in Indonesia plummet after the government authorized Ivermectin for treatment”. The overall implication of the article was that ivermectin caused the decline in cases. The article received more than 7,000 interactions on Facebook, Instagram, and Twitter, according to social media analytics tool CrowdTangle. Other outlets like the True Defender also propagated the claim. 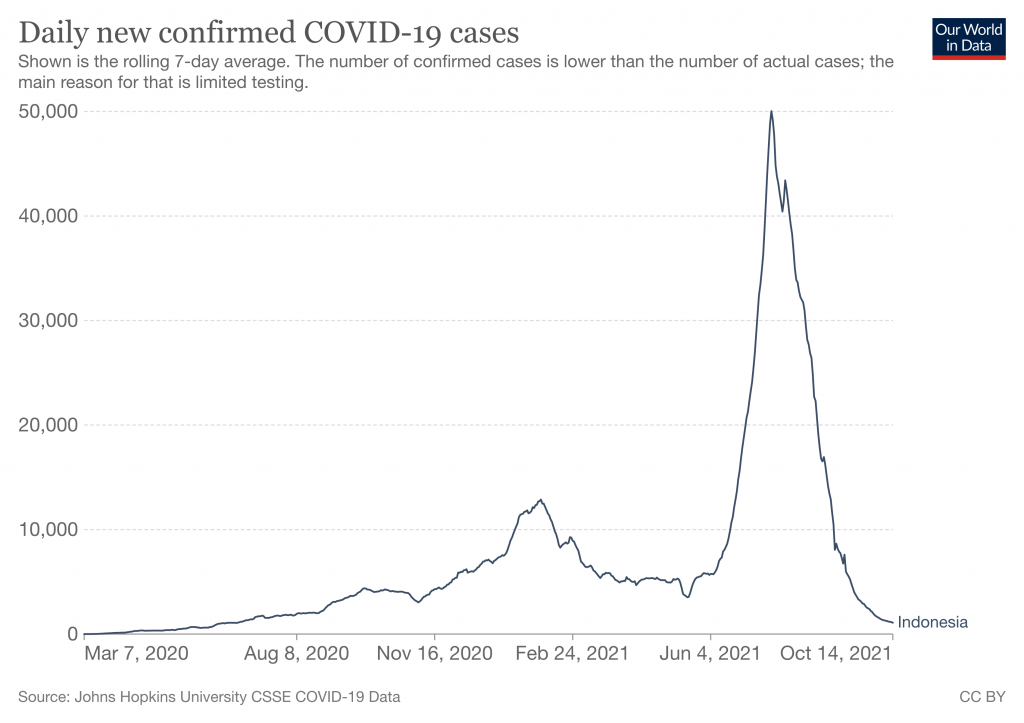 Figure 2. Daily number of confirmed COVID-19 cases in Indonesia between 8 March 2020 and 12 October 2021. Daily new confirmed cases are presented as the rolling 7-day average. Data and image from Our World in Data.

This is similar to another claim that ivermectin led to the drop in COVID-19 cases in India, which spread on social media between May and September 2021. Health Feedback reviewed this claim (see here and here) and found it to be unsupported by epidemiological and clinical evidence. As with the claim about India, there’s no evidence supporting a causal link between ivermectin and the fall in COVID-19 cases in Indonesia, as we will explain in this review.

Simply because two events coincide in time doesn’t necessarily mean that one caused the other. Firstly, ivermectin endorsement doesn’t tell us whether the Indonesian population actually used ivermectin more than populations in other countries.

Secondly, even if the use of ivermectin did increase following the recommendation, we still can’t assess whether the drop in COVID-19 cases in Indonesia was due to the use of ivermectin or to other factors. Epidemiological data from countries that recommended ivermectin, such as India and Peru, doesn’t indicate that promoting the drug reduced the spread of the disease or its death toll. Both countries experienced multiple COVID-19 waves with high mortality throughout 2020 and 2021, and both withdrew ivermectin recommendations in 2021.

As Health Feedback explained in previous reviews here, here, here, and here, clinical trials evaluating ivermectin’s efficacy in COVID-19 patients have been inconclusive so far. For that reason, international public health agencies, including the World Health Organization, don’t recommend using ivermectin to treat or prevent COVID-19 outside of clinical trials.

In contrast, several studies showed that COVID-19 restrictions effectively reduce virus transmission[1,2]. In July 2021, the Indonesian government applied several restrictions, including limited capacity in cafes, restaurants, and malls, travel restrictions, and suspension of religious activities. These measures were extended until September 2021 and likely contributed to the drop in COVID-19 cases.

Similar to the situation in India, COVID-19 vaccination and previous infection might have also increased immunity among the Indonesian population, reducing the likelihood of new infections happening. A seroprevalence survey conducted in Jakarta in March 2021, before the second COVID-19 wave, found that 44.5% of the capital’s population had antibodies against SARS-CoV-2.

But the high number of infections during the second COVID-19 wave likely increased the proportion of people with SARS-CoV-2 antibodies. In addition, the country has sped up its vaccination rate considerably. As of 14 October 2021, almost 40% of the Indonesian population has received at least one dose of COVID-19 vaccine and 22% are fully vaccinated. The results from a nationwide seroprevalence survey are expected in December 2021.

In summary, there is no evidence supporting the claim that ivermectin is behind the decline in COVID-19 cases in Indonesia. Reliable studies haven’t found evidence that ivermectin effectively treats COVID-19. In contrast, other factors such as restrictions, vaccination, and immunity from previous infections—which were also present in Indonesia at the same time as the ivermectin recommendation—have been shown to effectively limit the spread of the virus, and likely contributed to the drop in COVID-19 cases in Indonesia.