Three scientists analyzed the article and estimate its overall scientific credibility to be 'low' to 'very low'. more about the credibility rating
A majority of reviewers tagged the article as: Biased, Conflate facts and opinions, Flawed reasoning, Inaccurate, Misleading. 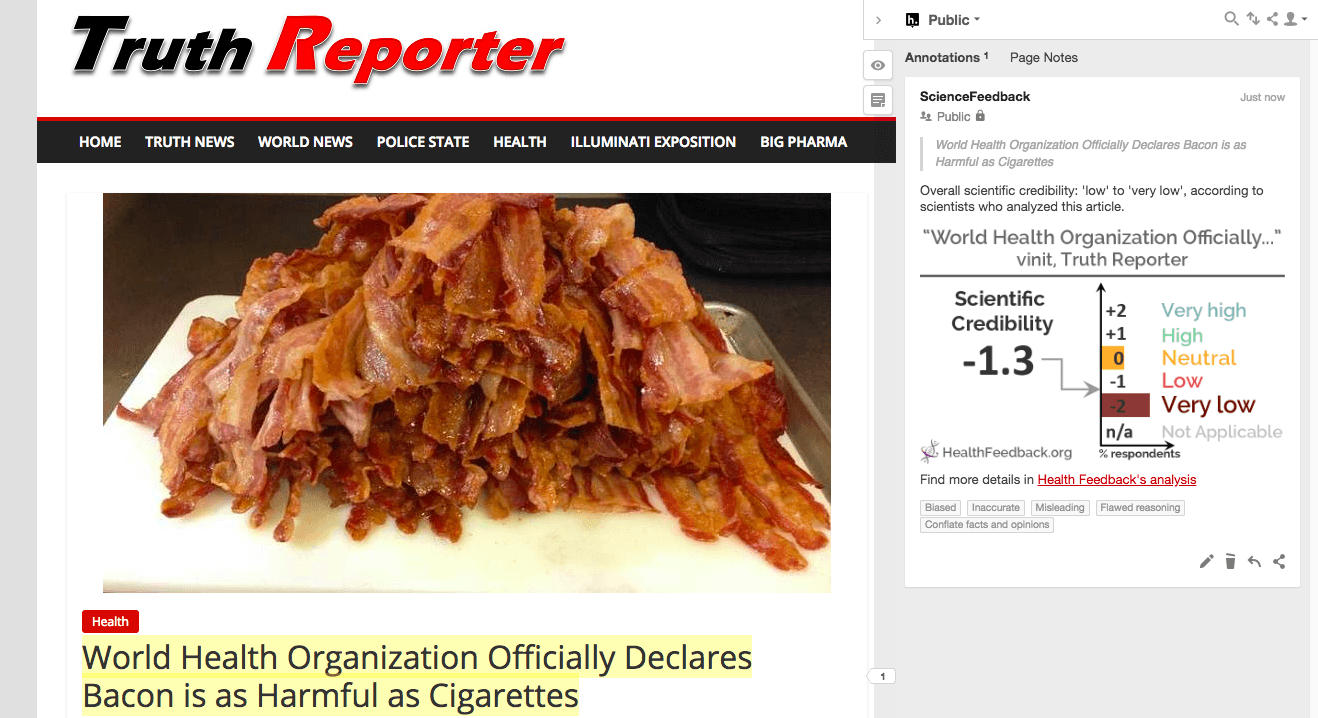 This article from a news website called “Truth Reporter”, which has been widely shared on social media, comments on the 2015 decision by the International Agency for Research on Cancer (IARC) to classify processed meat as Group 1 substances (to which tobacco also belongs), i.e. carcinogenic to humans, after an evaluation of more than 800 studies. The article criticised this decision as “obvious” and “simplistic”, going on to dismiss the role of the World Health Organization (WHO) as a leading health authority, claiming that “people would be better off using […] other reliable and demonstrable sources of information […] than the WHO.”

Reviewers found the article to be inaccurate, biased, and misleading. Their key issue with the article was its misinterpretation of the significance of Group 1 classification by the IARC. They explained that the Group 1 classification indicates a clear relationship between processed meat and cancer, but not how high the risk of cancer is. Reviewers also strongly disagreed with the article’s critical stance on the WHO, stating that the WHO’s work is supported by current evidence and a broad base of expertise, which justifies its position as a leading health authority and a credible and trusted source of information.

You can read the original article here.

[This is part of a series of reviews of 2018’s most popular health and medicine stories on social media. This article has been shared more than 580,000 times.]

Jana Anderson, Research Fellow, University of Glasgow:
The classification of processed meat as “Group 1” –carcinogenic to humans– means that the evidence is as strong as for other risk factors included in the Group 1 category, including tobacco. It does not mean that the risk is the same. While Cancer Research UK estimates that 19% of all cancers are caused by tobacco, processed meat is estimated to cause 3% of all cancers. The presentation of the facts in this article is therefore inaccurate, confusing and misleading to the readers.

The author misunderstood and misrepresented the report, which also led them to confuse the reader about the role of the World Health Organization (WHO) and discount its credibility. The WHO’s role is to direct and coordinate international health, and it is here to provide leadership on issues related to health. The WHO is a credible source that provides accurate information based on current evidence and it is trusted by decision-makers worldwide.

Christopher Labos, Associate, McGill Office for Science and Society:
This article borders on being a conspiracy theory. The designation of bacon as carcinogenic in 2015 – and the resultant media stampede – was somewhat overdone and was caused by a fundamental misunderstanding of what the International Agency for Research on Cancer (IARC) said and what they were trying to do.

There are very valid grounds to criticize the IARC for their classification system, but it comments on how clear the evidence is, not how dangerous something is: the evidence can be very clear that something is dangerous, but the amount of danger that the thing poses can be very small. In any case, this article does little to explore this nuance, and simply labels the WHO as an organization that has no genuine intention of keeping people healthy.

Rosemary Stanton, Nutritionist and Visiting Fellow, University of New South Wales:
I regard the article as misleading.

For a start, the WHO did not make this claim, and this was in fact clarified here:

No, processed meat has been classified in the same category as causes of cancer such as tobacco smoking and asbestos (IARC Group 1, carcinogenic to humans), but this does NOT mean that they are all equally dangerous. The IARC classifications describe the strength of the scientific evidence about an agent being a cause of cancer, rather than assessing the level of risk.”

Secondly, what the WHO does is adequately explained here, stating that, “In line with the mission to provide global leadership in public health, WHO employs health specialists, medical doctors, scientists, epidemiologists and also people with expertise in administration and finance, information systems, economics, health statistics as well as emergency preparedness and response.”

These issues are rejected by the so-called ‘Truth Reporter’, whose comments about the WHO would indicate that they do not understand or want to understand the enormous tasks needed in public health. The Truth Reporter website does not disclose details about their funding, potential conflicts of interest, or who the authors of their articles are.