Two scientists analysed the article and estimate its overall scientific credibility to be low to very low. more about the credibility rating
A majority of reviewers tagged the article as: Clickbait headline, Flawed reasoning, Lack of context, Misleading. 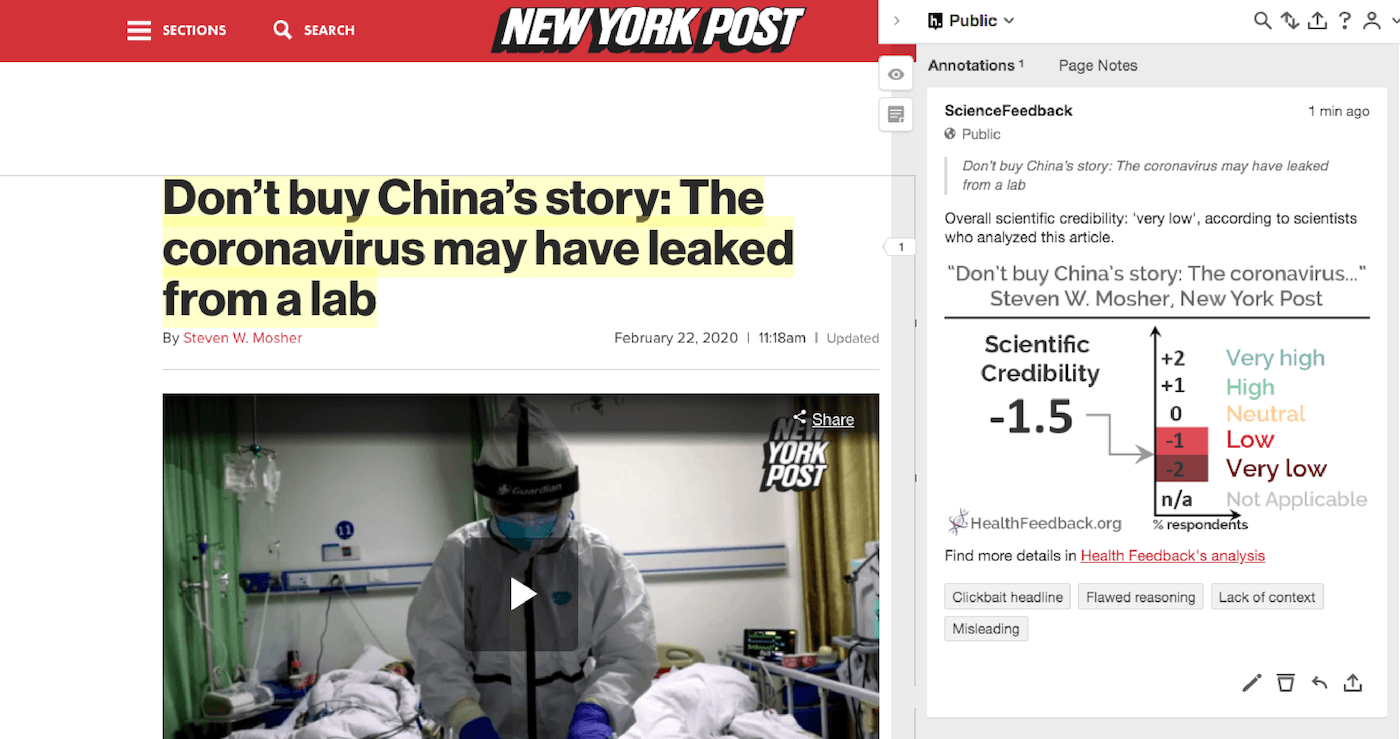 This article, published in the New York Post on 22 February 2020, went viral on Facebook within days and had received more than 13 million views and 100,000 shares at the time of this review’s publication. Written by Steven W. Mosher, who lacks experience in virology or biological research, the article claims that the new coronavirus is the result of a leak in a Chinese laboratory and suggests that it is related to bioweapons research. Other outlets, such as the Daily Wire and InfoWars, have repeated the same claims based on the New York Post article. Before this article was published, similar or identical claims have been made in multiple outlets, with many based on research findings that were not peer-reviewed and are of dubious validity. (Health Feedback covered several of these claims here, here, and here.)

Mosher’s argument is based on announcements made by the Chinese government and the Chinese Ministry of Science and Technology in which China’s president, Xi Jinping, called for containment of the virus in a speech on 3 February 2020 and the Ministry “released a new directive” on improving biosafety measures. Mosher asserts that these announcements indicate that “China [is having] a problem keeping dangerous pathogens in test tubes where they belong”, and that “evidence points to SARS-CoV-2 research being carried out at the Wuhan Institute of Virology”, which he labeled a “bioweapons research lab”. He finally concludes by saying that “China has unleashed a plague on its own people.”

Infectious disease experts who are actively involved in the coronavirus outbreak response explained to Health Feedback that Mosher’s claims are inaccurate and misleading. Danielle E. Anderson, assistant professor and virologist at Duke-NUS Medical School in Singapore, and part of the team that developed the world’s first antibody test for COVID-19, said it is “simply false” to label the Wuhan Institute of Virology (WIV) as a bioweapons research lab, adding that biosecurity at the institute is top-notch.

“I have worked in this exact laboratory at various times for the past two years,” she said. “I can personally attest to the strict control and containment measures implemented while working there. The staff at WIV are incredibly competent, hardworking, and are excellent scientists with superb track records.”

Anderson pointed out that there was nothing unusual about the Chinese ministry’s directive. “This sort of directive is something that is put in place immediately when dealing with a new pathogen”, she said. “I can guarantee that every research lab or hospital that handles the virus, virus derivatives, patients, or patient samples has drafted a similar mandate. I know that all the institutes that my work falls under have done so. It is a positive directive designed to enhance safety.”

Marc Lipsitch, professor of epidemiology at the Harvard T.H. Chan School of Public Health, came to the same conclusion. “Any responsible government would strengthen safety and security procedures in high-containment# labs that will and should be working with the novel coronavirus to develop countermeasures and diagnostics.”

The persistent spread of misinformation about the coronavirus prompted 27 eminent public health experts in the U.S., Europe, the U.K., Australia, and Asia to publish a statement in The Lancet on 19 February 2020 defending the integrity and response of China’s health professionals:

“We have watched as the scientists, public health professionals, and medical professionals of China, in particular, have worked diligently and effectively to rapidly identify the pathogen behind this outbreak, put in place significant measures to reduce its impact, and share their results transparently with the global health community. This effort has been remarkable. […]

The rapid, open, and transparent sharing of data on this outbreak is now being threatened by rumours and misinformation around its origins. We stand together to strongly condemn conspiracy theories suggesting that COVID-19 does not have a natural origin. Scientists from multiple countries have published and analysed genomes of the causative agent, severe acute respiratory syndrome coronavirus 2 (SARS-CoV-2@) and they overwhelmingly conclude that this coronavirus originated in wildlife[1,2,3,4,5,6,7] as have so many other emerging pathogens.”

You can read the original New York Post article here.

UPDATE (21 April 2020):
The New York Post suggested in a 17 April 2020 article that Health Feedback flagged its article on Facebook despite knowing it was labeled an opinion piece. This is false. The original New York Post article was not labeled as an opinion article in any way before it was flagged as false content, as can be seen by this archive made on 23 February 2020; it was later quietly updated with an Opinion tag.

Danielle E. Anderson, Assistant Professor, Duke-NUS Medical School:
It is difficult to respond to this article because it is infuriating on a personal and professional level. To provide context for my opinion, I will disclose that I am a scientist trained to work in high containment and have collaborative projects with the Wuhan Institute of Virology (WIV). I have worked in this exact laboratory at various times for the past 2 years. I can personally attest to the strict control and containment measures implemented while working there. The staff at WIV are incredibly competent, hardworking, and are excellent scientists with superb track records.

The article states: “Chinese Ministry of Science and Technology released a new directive entitled: ‘Instructions on strengthening biosecurity management in microbiology labs that handle advanced viruses like the novel coronavirus’” and then implies that this is an abnormal directive designed to fix a lab breach. On the contrary, this sort of directive is something that is put in place immediately when dealing with a new pathogen. I can guarantee that every research lab or hospital that handles the virus, virus derivatives, patients, or patient samples has drafted a similar mandate. I know that all the institutes that my work falls under have done so. It is a positive directive designed to enhance safety.

Designating the Wuhan Institute of Virology as “one of only two bioweapons research labs in all of China” is simply false, as is stating [that Maj. Gen. Chen Wei is] the “People’s Liberation Army’s top expert in biological warfare”. I don’t know where to start on this comment. Mentioning that “Maj. Gen. Chen has been researching coronaviruses since the SARS outbreak of 2003, as well as Ebola and anthrax” doesn’t even make her unique. Hundreds of scientists have that exact expertise. Swap “anthrax” with “Nipah virus” and that is also my CV.

One negative statement in the article is true, and that is the accidental infection with SARS (although surprisingly the article doesn’t greatly emphasize the only fact). The story can be found here.

The article claims that bats are not sold at the Wuhan market, so they could not be the source of infection. The author chooses to imply that these animals are not sold illegally at the market, yet has no problem implying that lab animals are illegally sold.

Overall, this is an appalling article.

Marc Lipsitch, Professor of Epidemiology, Harvard T.H. Chan School of Public Health:
This article contains lots of circumstantial evidence put together in an inflammatory way. Any responsible government would strengthen safety and security procedures in high-containment labs that will and should be working with the novel coronavirus to develop countermeasures and diagnostics, etc. This hypothesis for its origin has been judged very unlikely by leading experts in viral evolution[8].

#: For a brief overview of different levels of biocontainment, please see this Public Health England website.
@: The virus responsible for COVID-19 has been named SARS-CoV-2. The World Health Organization explains that: “This name was chosen because the virus is genetically related to the coronavirus responsible for the SARS outbreak of 2003. While related, the two viruses are different.”

An analysis published in Nature Medicine on 17 Mar. 2020 further supports our conclusion that the virus causing COVID-19 has a natural origin[8], stating that: “Our analyses clearly show that SARS-CoV-2 is not a laboratory construct or a purposefully manipulated virus.” This publication has been added to our References.

Similar or identical claims on the origins of the coronavirus have been fact-checked by multiple organizations, including PolitiFact, FactCheck.org and AAP FactCheck.