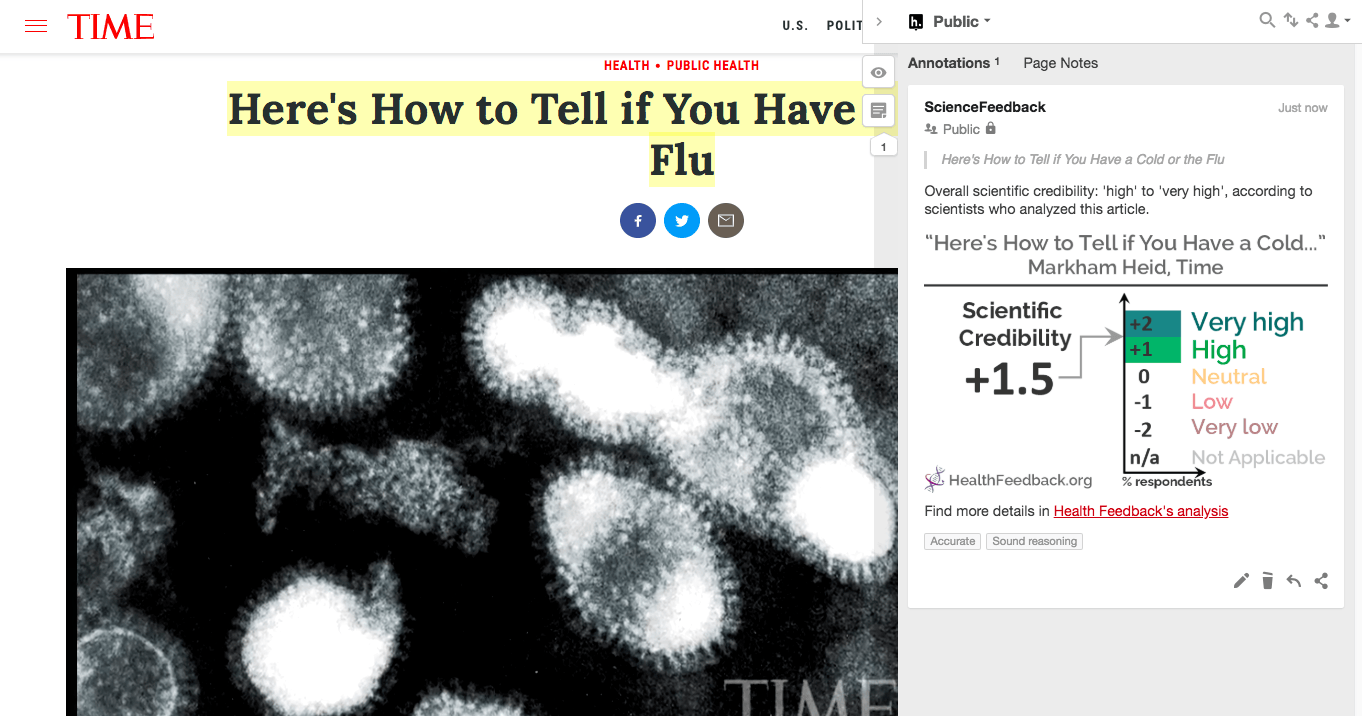 This article by Time discusses the main culprits behind viral respiratory infections (VRIs), ways to distinguish between infections caused by the influenza virus and those caused by other viruses, and how to prevent or treat VRIs.

Reviewers found that the article was accurate and useful in reporting the distinguishing features between an influenza infection and other VRIs (often referred to as “flu” and the “common cold”, respectively), such as onset, duration and types of symptoms, as well as the time of year in which symptoms manifest. They also found that the article provided accurate figures of annual influenza mortality and how to prevent and treat these infections (for instance, by getting the flu shot to reduce risk of infection, or taking antiviral drugs in a timely manner to treat the infection). However, they pointed out the article’s assertion that other respiratory viruses do not result in “lasting harm” as untrue, since some viruses are known to cause life-threatening illness in certain segments of the population, such as young children and the elderly.

You can read the Time article here.

[This is part of a series of reviews of 2018’s most popular health and medicine stories on social media. This article has been shared more than 560,000 times.]

Simon Drysdale, Consultant and Senior Lecturer (Paediatric Infectious Diseases), St George's, University of London:
Generally accurate. However, the main issue is that influenza viruses can also cause a “cold”, i.e. upper respiratory tract infection. A “cold” is a symptom/diagnosis whereas “influenza” is a virus that can cause symptoms such as a cold. There could be a better distinction by saying there are lots of viruses (flu, respiratory syncytial virus (RSV), human metapneumovirus (HMPV), rhinovirus, coronavirus, etc.) that cause respiratory infections including “colds” and “chest infections”. Some of those influenza viruses can cause a more severe disease than others, although all of the viruses can result in severe disease or death – this varies a bit by population. For example, RSV is much more of a problem than flu in young infants.

Joshua G. Petrie, Research Investigator, University of Michigan School of Public Health:
The conclusions of the article are generally accurate and helpful. More links to primary sources for more information (e.g. from the Centers for Disease Control) would be better. The article’s statement on annual influenza mortality (“Influenza kills about 35,000 Americans per year, whereas colds rarely cause lasting harm,”) is in range with CDC estimates. However, it is inaccurate to say that other viruses do not result in deaths. For example, RSV can cause severe illness in very young children, older adults, and people with chronic medical conditions.

Harri Hemilä, Senior Researcher (Department of Public Health), University of Helsinki:
Given the space available, and the level of understanding by the average reader, I think this is a good article.

Christopher Labos, Associate, McGill Office for Science and Society:
A fairly accurate article. Maybe a few quibbles about some points, but overall it explains things well and provides some insight in how to differentiate a cold from the flu.

“You could take aspirin or acetaminophen for a fever, or decongestants for your runny nose. Zinc lozenges may also help curtail your cold, research has found.“

Harri Hemilä, Senior Researcher (Department of Public Health), University of Helsinki:
That is correct. There is evidence that zinc lozenges help with colds (I have published several analyses), but there is also a problem that proper zinc lozenges are not widely available. However, we may hope that such lozenges will improve when patients learn more about them.