Two scientists analyzed the article and estimate its overall scientific credibility to be neutral. more about the credibility rating 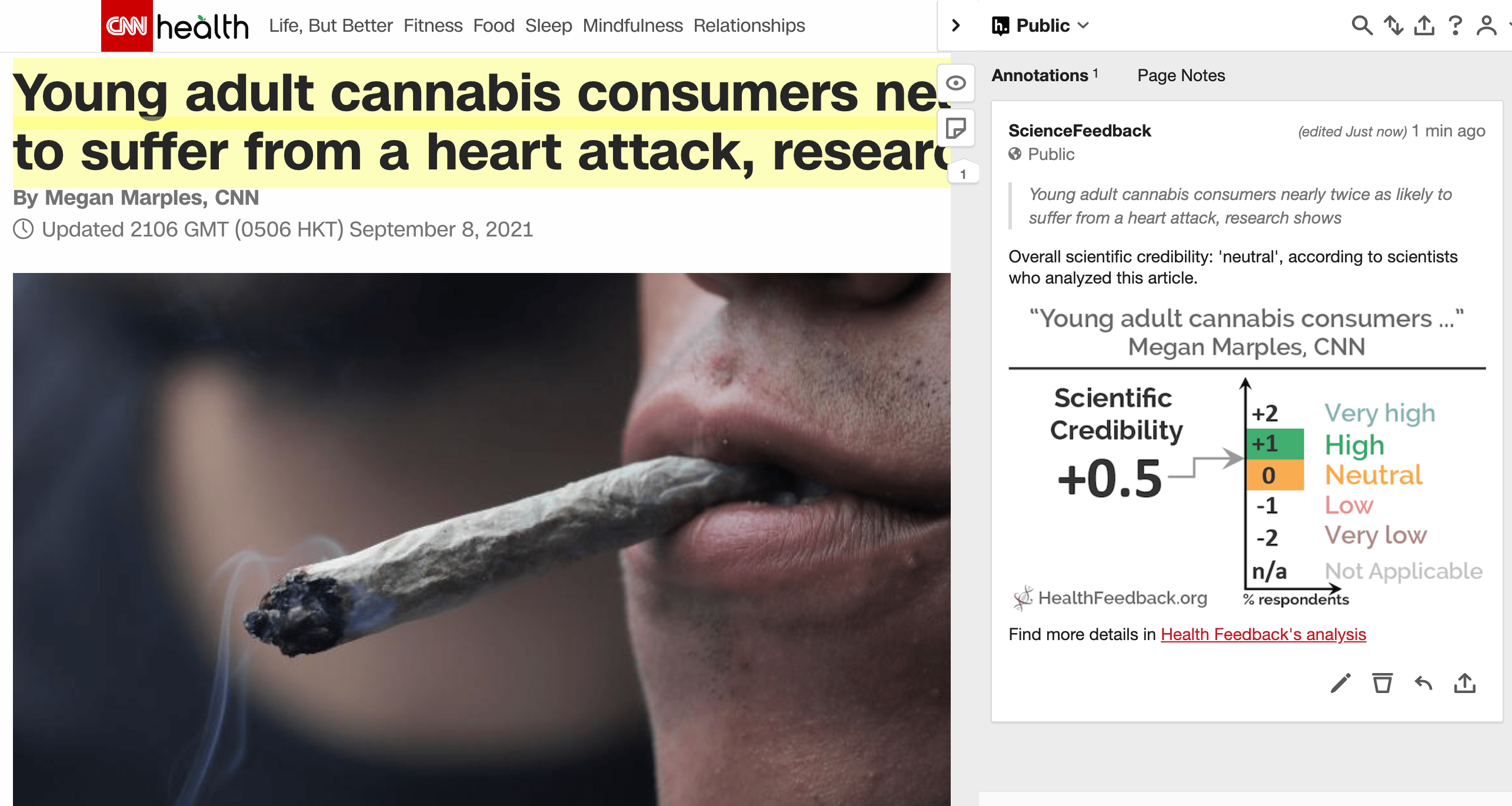 This article by CNN, published on 7 September 2021, describes a study published in the Canadian Medical Association Journal (CMAJ)[1]. The study assessed the prevalence of cannabis use and its association with myocardial infarction (heart attack) in young adults from the U.S., using national health survey data.

The authors of the study found that heart attacks were more frequent among young adults (aged 18 to 44) who reported using cannabis within the previous month (incidence of 1.3%) relative to non-users (0.8%). This information was presented in the CNN article as “young adult cannabis consumers nearly twice as likely to suffer from a heart attack”.

Scientists who reviewed the CNN article found that the results were accurately reported and in line with the findings of previous studies. However, the manner in which these results were presented in the CNN article could impede readers’ accurate understanding of the harm associated with cannabis, as the article doesn’t explain the difference between relative risk and absolute risk of heart attack.

Mitch Earleywine, professor of psychology at the State University of New York at Albany, agreed that the data suggested an increased risk for cardiac problems in cannabis users. However, he pointed out that the article “confuses absolute risk and relative risk” of heart attack for young cannabis consumers.

Absolute risk of a disease is the chance of developing the disease over a time period, while relative risk is used to compare the risk between two groups of people. According to the study published in CMAJ, cannabis users’ relative risk of suffering a heart attack increased by 62.5% when compared to non-users[1]. However, if we look at the absolute risk of suffering a heart attack, the increase in risk is by 0.5% among young cannabis users, a much smaller value compared to the relative risk.

Pal Pacher, senior investigator at the Laboratory of Cardiovascular Physiology and Tissue Injury of the U.S. National Institutes of Health, noted that the results from the study published at CMAJ were “highly predictable with increased potency of THC in marijuana”. The term THC is commonly used to refer to the chemical delta-9-tetrahydrocannabinol, the main psychoactive ingredient present in cannabis.

As highlighted in the CNN article, cannabis has become more potent over the last decades. The quantity of THC present in dried cannabis has increased from approximately 4% during the 1990s to more than 12% in recent years[3]. This rise in THC content in cannabis has been accompanied by the emergence of serious cardiovascular events, including heart attacks, arrhythmias (abnormal heart rhythms), and strokes[4].

Overall, the data reported by the CMAJ study is consistent with previous findings. While the CNN article is accurate in reporting that young cannabis users have nearly double the risk of a heart attack compared to non-users, the article doesn’t provide readers with sufficient context to understand the difference between absolute and relative risk, thereby potentially exaggerating the risk of heart attack among young adults who use cannabis.

You can read the original CNN article here.

Pal Pacher, Senior Investigator, National Institutes of Health:
Similar results were published previously in numerous case reports and these results were highly predictable with increased potency of THC in marijuana and with increased potency of synthetic cannabinoids on cannabinoid 1 receptors. See our related review in the number one journal of the field, Nature Reviews Cardiology[4].

Furthermore, clinical trials with peripherally restricted cannabinoid receptor agonists (see also the review) for pain also failed because of cardiovascular and metabolic side effects. So this paper shows highly expected results. The misinformation is if one claims that marijuana and synthetic cannabinoids have no cardiovascular side effects.