CLAIM
“The COVID-19 virus does not exist”; “The virus has never been isolated”
VERDICT more about the rating framework

Several scientific research groups independently identified and isolated SARS-CoV-2, the virus causing COVID-19, as demonstrated in numerous published studies. Studies also show that the virus fulfils Koch’s postulates, indicating that it is indeed the cause of COVID-19.

Numerous posts claiming that the virus causing COVID-19 does not exist and has never been isolated in laboratories went viral on social media platforms like Facebook in December 2020. One example can be seen in this Facebook post, which appears to provide an account of a clinical lab scientist who alleges that COVID-19 is “imaginary and fictitious” and that no laboratory “has ever isolated and purified this virus in its entirety.” Another example is a video featuring journalist Gemma O’Doherty, who also claims that there is no evidence that the virus causing COVID-19 exists and that the virus has never been isolated and does not adhere to Koch’s postulates. O’Doherty claims that meeting Koch’s postulates is required to “validate that a virus exists.”

The claim that the virus that causes COVID-19 does not meet Koch’s postulates is false and was covered in a previous Health Feedback review. Below, we recap our earlier findings and explain why the claim that “the virus has never been isolated” is also false.

What Koch’s postulates are—and what they are not

The postulates were originally developed by Robert Koch, a German physician who won the Nobel Prize for Physiology or Medicine in 1905 for his work on tuberculosis. The original postulates are as follows:

While these postulates remain an important foundation for establishing the cause of an infectious disease today, scientists also recognize that there are limitations to these criteria. Vincent Racaniello, a virologist and professor at Columbia University’s College of Physicians & Surgeons, wrote in his blog post that “Despite the importance of Koch’s postulates in the development of microbiology, they have severe limitations, which even Koch realized.” For example, Vibrio cholerae, the bacterium that causes cholera, could be isolated from both sick and healthy people, invalidating postulate #1.

Other notable exceptions to the original postulates that Racaniello pointed out are viruses, such as poliovirus, which cause illnesses of varying severity. For example, fewer than 1% of individuals infected by polio are affected by paralysis. Because the resulting disease does not manifest in the same way for all infected individuals, the virus that causes the disease does not fulfil postulate #3. Additionally, Racaniello writes, “Postulates #2 and #3 cannot be fulfilled for viruses that do not replicate in cell culture, or for which a suitable animal model has not been identified.” Consequently, over the past decades, scientists have found it necessary to adapt Koch’s postulates to study viral diseases[1-3].

Ian Lipkin, professor of epidemiology and director at the Center for Infection and Immunity of Columbia University’s Mailman School of Public Health, told Health Feedback in an earlier review that many published studies already demonstrated that SARS-CoV-2, the virus that causes COVID-19, fulfills Koch’s postulates[4-6]. Specifically, researchers isolated SARS-CoV-2 from COVID-19 patient samples, propagated the virus in cell cultures in the laboratory, and infected non-human primates with the cultured virus. The infected primates displayed the same signs of COVID-19 as humans, including lung damage and pneumonia. Finally, the researchers were able to detect the virus in the infected animals. With these findings, all four of Koch’s postulates are met, demonstrating that SARS-CoV-2 is the cause of COVID-19.

It is also false to state that the virus that causes COVID-19 has never been isolated. Virologist and associate professor at the University of Queensland Ian Mackay showed in this blog post how multiple scientific studies demonstrated that SARS-CoV-2 was isolated independently in multiple labs across the world. These studies, which are freely accessible to the public on the Internet, provide evidence that the virus does indeed exist and furthermore, is not being confused with other viruses.

One of the very first studies to characterize SARS-CoV-2 was published in February 2020 by Zhou et al. The study was led by researchers at the Wuhan Institute of Virology and published in Nature. The authors sequenced the virus’ genetic code from COVID-19 patient samples as well as viral samples grown in cell cultures, and provided electron microscopy images of the SARS-CoV-2 virus (see Figure 1)[7]. 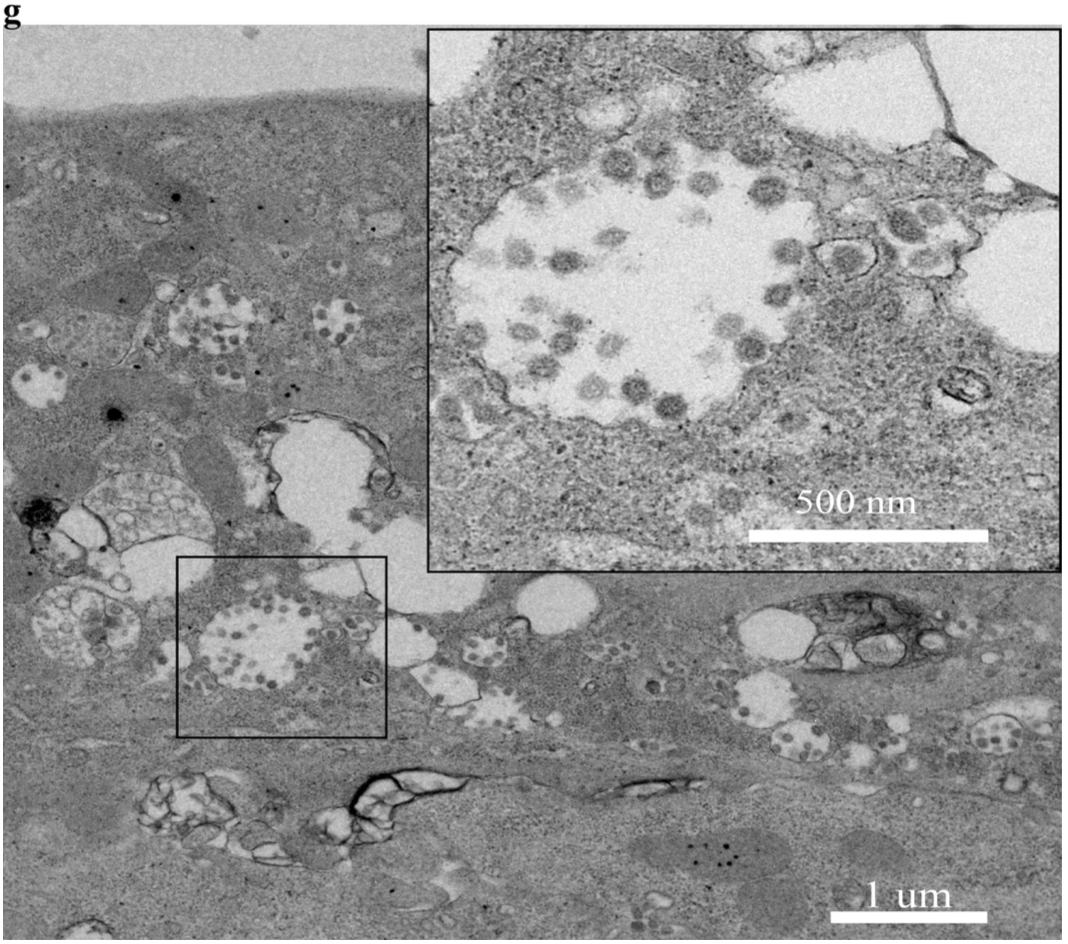 Another study captured images of the SARS-CoV-2 virus using a technique called cryo-electron tomography, which was published by Turoňová et al., a group based at the European Molecular Biology Laboratory in Heidelberg, Germany, in Science (see Figure 2 below)[8]. In their study, Turoňová et al. used the SARS-CoV-2 BavPat1/2020 isolate, which was obtained from an infected patient in Germany. Mackay described their study thus:

“Beata Turoňová and team took some of the SARS-CoV-2 BavPat1/2020 isolate, grew it in Vero E6 cell culture, passaging (infecting, harvesting, infecting a fresh flask of cells and so on) five times. They took this virus and centrifuged all the uninfected cells and cell debris and made stocks into a pellet, and collected and froze the liquid above the inactivate (the supernatant).

Some of this stock was later thawed and used to infect a fresh new flask of Vero E6 cells. After six hours the cultures were fixed (treated with a chemical to kill the cells and inactivate the virus while retaining the cell and virus structures—like freezing them in time). This preparation was clarified twice by centrifugation (now a pretty pure preparation of virus + salty solution). This was then layered gently onto a cushion of sucrose (20% weight per volume) in a special tube. The tubes were centrifuged at very high speed (30,000 rpm) in an ultracentrifuge and the pellet—consisting of virus (any less dense material like small particles of cell debris couldn’t travel through the more dense sucrose cushion)—was suspended in a tenth of a millilitre of saline.

They now had a very pure preparation. There are no Vero E6 cells or bacteria or broken up pieces left, just the tiny virus particles.

This was then prepared for cryo-electron tomography studies which allowed the investigators to view and produce images of single virions and even individual projecting spike protein trimers.

Some amazing detail can be seen below. A preparation of a virus can’t get much more ‘purified’ than this.”

In claiming that there is no evidence that the virus exists, O’Doherty demanded that Ireland’s Health Service Executive “describe the isolation of the SARS-CoV-2 virus […] taken directly from a symptomatic patient with COVID-19, where the sample was not combined […] or mixed with any other source of genetic material, such as for example monkey kidney cells or cancer cells, thereby eliminating contamination.”

However, this demand demonstrates a fundamental misunderstanding of how viruses work. Viruses, being obligate intracellular parasites[9], cannot grow on their own and can only replicate in the presence of host cells, like animal or human cells. Such cells are essential for growing viruses to conduct experiments. O’Doherty also does not produce any evidence demonstrating that host cells are causing “contamination” that interferes with virus identification.

Some have cast doubt on studies about COVID-19 and the virus SARS-CoV-2, alleging that researchers who published studies on SARS-CoV-2 cannot be certain that they were studying SARS-CoV-2, or even a virus at all, while others claim that COVID-19 is caused by the flu virus rather than a novel coronavirus (see Health Feedback’s earlier reviews).

Mackay pointed out a study in Germany that refutes these claims[10]:

“Let’s look at one variant of SARS-CoV-02 […] BetaCoV/Germany/BavPat1/2020 p.1 has been made available for researchers via reliable and professional providers of such biological materials (linked above). It was collected January 28th from a hospitalized male patient from Munich who was described as the index case of the Bavaria cluster in Germany […] He was initially suffering from cough, fever and diarrhoea. The SARS-CoV-2 variant from this patient is listed on the sequence database, GISAID, as hCoV-19/Germany/BY-ChVir-929/2020 (with [its] unique identified EPI_ISL_406862). It was sequenced from the original sample, not undergoing any cell culturing first. Obviously, after this, the virus was cultured and made available as a resource for other scientists to use—which it clearly has been and put to very good use. [Editor’s note: BetaCoV/Germany/BavPat1/2020 p.1 is the isolate used in the study by Turoňová et al. (see Figure 2)]

SARS-CoV-2 was confirmed in all of these cases by careful testing at two different laboratories. All patients in this Munich-based cluster were also tested for all other important respiratory viruses using sensitive PCR-based tests. These included:

No concurrent infections were identified. […]

All of this sums up as: the studies done on this virus are studies of this virus. These were not accidentally studies of some other (completely unknown beforehand by the way) virus. And the sequence was not ‘tainted’ by culturing; the SARS-CoV-2 entire genetic makeup was determined from material taken directly from the patient who was sick due to this virus and not another virus, at the time. They were also sick with an acute respiratory illness traditionally typical of a viral cause. It’s a tight case.” (emphasis added)

In summary, the claim that the virus that causes COVID-19 does not exist and is simply being confused with other viruses are false. As shown above, abundant scientific evidence demonstrates that SARS-CoV-2, the virus causing COVID-19, exists and fulfils Koch’s postulates, conclusively showing the virus to be the cause of the disease. Finally, studies on SARS-CoV-2 are indeed studies of SARS-CoV-2 and not of the flu virus or any other virus.

Some Facebook posts like this one falsely attributed this claim to Robert Oswald, a professor at Cornell University’s Department of Molecular Medicine. Oswald refuted this claim, clarifying with Snopes that “I certainly did not write this and am rather horrified by the contents.” Oswald’s Cornell University faculty profile page was updated to include this comment: “COVID-19 is real. Any Facebook post that suggests otherwise is a hoax and is not true. Wear a mask, practice social distancing, and get the vaccine when it becomes available.”

O’Doherty’s claim is based on the response of Ireland’s Health Service Executive (HSE) to a Freedom of Information request. The Journal, an online publication based in Ireland, explained in a fact-check why O’Doherty’s interpretation of the response by the HSE is incorrect and misleading.