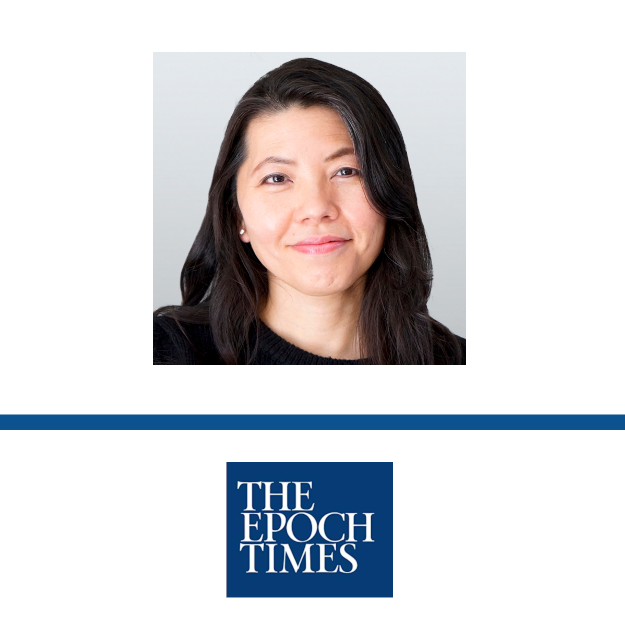 CLAIM
COVID-19 vaccine mRNA is converted to DNA and enters the cell’s nucleus, so the vaccines can potentially change our DNA
VERDICT more about the rating framework

DETAILS
Factually inaccurate: The study didn’t show reverse-transcribed DNA entering the nucleus. It also didn’t show that the DNA was integrated into the cell’s genome.
Unsupported: The experimental system used in the Lund University study is artificial. For example, it used liver cancer cells growing in the laboratory, which aren’t representative of healthy cells or a human being, to study whether the vaccine mRNA was reverse-transcribed. The study’s results therefore cannot be extrapolated to people.
KEY TAKE AWAY

Reverse transcription is a process by which RNA can be used as a template to produce DNA. It is mediated by an enzyme known as reverse transcriptase. In theory, while mRNA in vaccines can be converted into DNA by reverse transcription, there’s no scientific evidence demonstrating that this process occurs in people or that it leads to DNA integration in the genome.

FULL CLAIM: “The vaccine’s mRNA converting into DNA and being found inside the cell’s nucleus is something that the Centers for Disease Control and Prevention (CDC) said would not happen.”; Vaccine mRNA is incorporated into our genome; “This is the first time that researchers have shown in vitro or inside a petri dish how an mRNA vaccine is converted into DNA on a human liver cell line, and is what health experts and fact-checkers said for over a year could not occur.”

A study published by researchers at Lund University in Sweden made the rounds in late February 2022[1], with many social media users sharing it as evidence that COVID-19 mRNA vaccines change our DNA (see examples here and here). Articles, like this one published by the Epoch Times, also reported on the study in a similar fashion, leading readers to believe the study contradicted statements made by the U.S. Centers for Disease Control and Prevention, as seen from shares of the article here and here.

The false claim that COVID-19 mRNA vaccines change our DNA has been circulating since mid-2020, as this Health Feedback review documented. And the recent study by Lund University researchers fails to bring evidence to the contrary. This review explains what the study reported, what the findings mean (and what they don’t), and shows why the claim is inaccurate and misleading.

The foundations of the study and what the study reported

The study, titled “Intracellular Reverse Transcription of Pfizer BioNTech COVID-19 mRNA Vaccine BNT162b2 In Vitro in Human Liver Cell Line”, draws on an earlier controversial study by Zhang et al. published in May 2021 in the journal PNAS[2], in which scientists reported that SARS-CoV-2-infected cells carried DNA copies of the virus’ genetic material. Zhang et al. further reported that the presence of these DNA copies in the genome of the cells was enabled thanks to the action of a transposable element named LINE-1, which is present in human DNA. Transposable elements, discovered by the geneticist Barbara McClintock, are also known as “jumping genes” because of their ability to move from one place to another in the genome.

What made the study by Zhang et al. controversial was the fact that other scientists weren’t able to reproduce the results[3]. In a letter to PNAS[4], another group of scientists questioned the conclusions of the study by Zhang et al., highlighting several flaws in the experiment, suggesting that the study’s findings were likely due to experimental artifacts rather than a genuine phenomenon. The letter called for caution in the interpretation of the study:

“Given the inappropriate interpretation of high-throughput sequencing methods and improper experimental design by the authors, we ask for restraint about the conclusions presented by the study. It remains unlikely that retrotranscription and integration of the SARS-CoV-2 genome in patients happens at any notable frequency, or even at all.”

The contention about the study by Zhang et al. notwithstanding, Aldén et al. at Lund University formulated the hypothesis that reverse-transcribed DNA in SARS-CoV-2-infected cells could also happen in the context of mRNA vaccines. Such a hypothesis, as the authors pointed out, has implications for vaccine safety, as foreign DNA integration into the genome could lead to problems like cancer. No reference to the study which failed to reproduce the results from Zhang et al. was made in the Lund University study.

In the recent study, the scientists added varying amounts of the Pfizer-BioNTech COVID-19 vaccine to a cell culture of human liver cells derived from a hepatocarcinoma (liver cancer). This human liver cell line is named Huh7.

The scientists then measured the amount of LINE-1 in the cells and the presence of reverse-transcribed DNA corresponding to the mRNA from the vaccine. They reported that the cells contained more LINE-1 after mRNA exposure and that at least partial DNA copies of the vaccine mRNA were present.

Based on these results, they suggested that the vaccine could affect the integrity of the human genome, leading to health problems, as this line attests to: “Our study shows that BNT162b2 can be reverse transcribed to DNA in liver cell line Huh7, and this may give rise to the concern if BNT162b2-derived DNA may be integrated into the host genome and affect the integrity of genomic DNA, which may potentially mediate genotoxic side effects.”

The study didn’t show that reverse-transcribed DNA entered the nucleus; its experimental system is artificial and not representative of normal cells

The claim that the study showed that COVID-19 mRNA vaccines change our DNA or enter the nucleus is inaccurate and fails to understand the study’s findings.

Contrary to reports like the one by the Epoch Times, the study didn’t show the mRNA or reverse-transcribed DNA entering the nucleus of cells. The nucleus is where an organism’s DNA is stored. Rhys Parry, a postdoctoral research fellow at the University of Queensland who studies viral evolution, told Health Feedback that the study’s immunofluorescence experiment showed LINE-1 (in red; the nucleus is marked in blue) to be predominantly present in the cytoplasm of the cell, and this is the case even in the absence of the vaccine. [See Parry’s full comments below. Editor’s note: In the interest of full disclosure, Parry is among the scientists who authored the letter to PNAS mentioned above.] 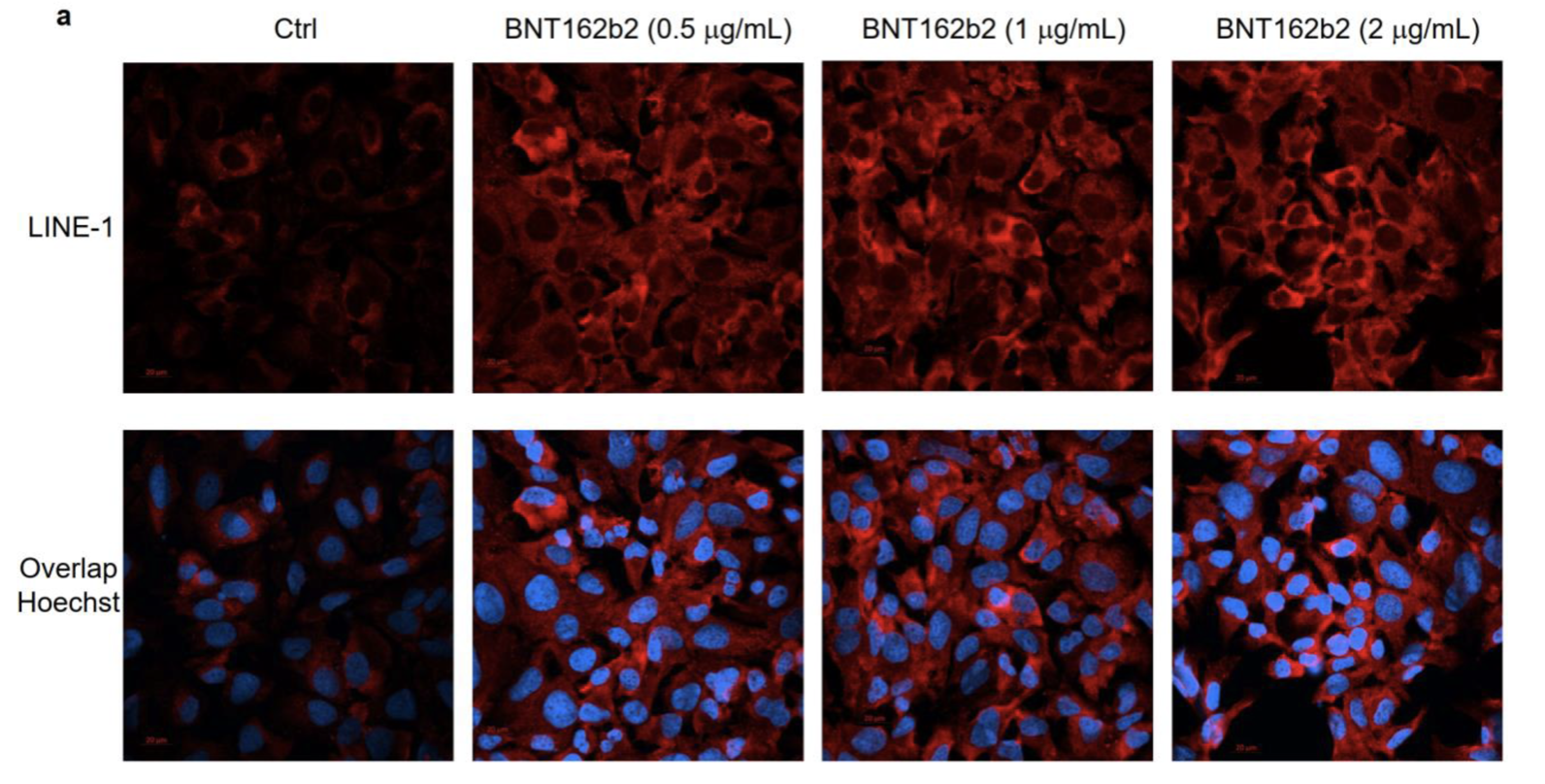 A technique called immunofluorescence was used by the researchers to visualize the location of LINE-1 and the nucleus in the cells[1]. The color red indicates LINE-1, while the color blue marks the nucleus.

“[T]here is no increased signal in the regions that correspond to the nucleus when the mRNA is increased, in fact you can see the clear gaps where the nucleus is,” Parry pointed out.

“Therefore I would disagree that the study convincingly shows an increase in the nuclear location of LINE-1. If anything it just shows that LINE-1 expression increases in the cytoplasm of the cells. Just because you have more expression of a protein it doesn’t mean the distribution of that protein fundamentally changes,” he explained.

More importantly, the study never showed that the reverse-transcribed DNA integrated into the cell’s genome. “[T]here is no evidence presented [in the study showing] that the mRNA is integrated into the genome of the host cells,” Parry said. “There is no high-throughput sequencing of the Huh7 cell line and no evidence of other conventional methods of detection of [genomic] DNA such as Southern blot.”

Indeed, Aldén et al. even acknowledged the same in the study, writing that “At this stage, we do not know if DNA reverse transcribed from BNT162b2 is integrated into the cell genome.”

Other scientists, such as surgeon and cancer researcher David Gorski, pointed out additional issues with the study, such as the fact that the experimental system used by Aldén et al. is artificial. It involved a cancer cell line, which isn’t representative of normal cells. Cancer cells are also more likely to overexpress LINE-1 compared to healthy cells. Furthermore, the amount of vaccine used in the experiment (2 micrograms/mL of vaccine to 200,000 cells) is much higher than the amount that adults receive through vaccination (30 micrograms per person).

In summary, contrary to claims made by certain media outlets and social media users, the study by Lund University researchers didn’t show that the mRNA or reverse-transcribed DNA enters the nucleus and more importantly, it didn’t show that the COVID-19 mRNA vaccines alter our DNA.

Rhys Parry, Postdoctoral Research Fellow, University of Queensland:
I would say that the news reporting that is covering this particular study is greatly misleading and I would also state that there are a number of claims the study madke that are not supported by the study itself.

The study conducted by Aldén and colleagues published in Current Issues in Molecular Biology claimed that there is reverse-transcription of Pfizer BioNTech COVID-19 mRNA in the human liver cell line Huh7 cell line. Additionally, there are claims such as there being an “increased nucleus distribution of LINE-1” in response to the Pfizer-BioNTech COVID-19 mRNA in the Huh7 cell line.

It is uncontentious that endogenous retrotransposases such as LINE-1 are expressed in the cell lines outside of the cell nucleus and in many in vitro systems. If you input RNA into the system, it might be retrotranscribed (made into DNA) by endogenous retrotransposases. Aldén and colleagues actually show that LINE-1 is basally expressed in Figure 4 in the cytoplasm, which is where the production of the Spike protein from the mRNA vaccine should be taking place.

However as you can see in that same figure, there is no increased signal in the regions that correspond to the nucleus when the mRNA is increased; in fact, you can see the clear gaps where the nucleus is. Therefore I would disagree that the study convincingly shows an increase in the nuclear location of LINE-1. If anything, it just shows that LINE-1 expression increases in the cytoplasm of the cells. Just because you have more expression of a protein it doesn’t mean the distribution of that protein fundamentally changes.

What’s important in the reporting of this paper is that if mRNA is converted to DNA in the cytoplasm, there is no reason to think that it would then enter your nucleus and then insert itself in the genome of the host cell. That link is missing in the results of the paper, the paper merely demonstrates that it is possible for reverse transcription of the mRNA to take place, but it does not prove or indicate where this reverse-transcribed DNA is located. Importantly there is no evidence presented that the mRNA is integrated into the genome of the host cells, there is no high throughput sequencing of the HuH7 cell line, there is no evidence of other conventional methods of detection of genomic DNA such as Southern blot.

When I see reports of this study that state “Findings conflict with CDC’s claim that vaccine never enters nucleus”, I would argue that these reports misrepresents the findings of the study which never showed categorically that the DNA enters the nucleus.

A previous study by Zhang et al. published in PNAS last year[2] also showed a similar finding. A group of scientists, including myself, wrote a critical letter published in the same journal to discuss the inappropriate interpretation of these results by the scientists and to ask for restraint about the conclusions presented by the study[4]. It is also important to note that these results have not been able to be reproduced by other researchers[3].