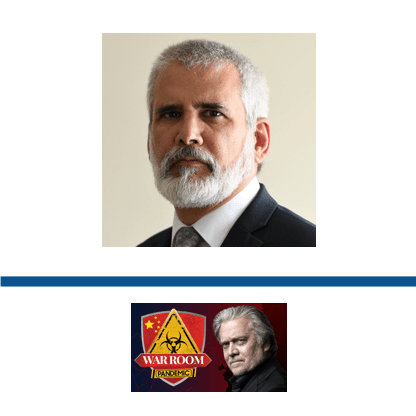 DETAILS
Inadequate support: COVID-19 vaccines haven’t shown signs of antibody-dependent enhancement (ADE) in animal studies or vaccinated people. On the contrary, evidence indicates that vaccination reduces the risk of infection and the severity of the disease.
Misrepresents source: Fully vaccinated people who become infected tend to carry a lower viral load compared to unvaccinated people. The video misinterpreted an article by NBC News reporting on new data that is specifically about the Delta variant only. When infected with this variant, vaccinated people might have viral levels similar to unvaccinated people, but not higher as the video claimed.
KEY TAKE AWAY

FULL CLAIM: “The [COVID-19] vaccine causes the virus to become more infectious than would happen in the absence of vaccination”; “the [viral] titers in the vaccinated are actually higher than in the unvaccinated”

Both Bannon and Malone have previously spread misinformation on COVID-19 vaccines. In November 2020, Twitter permanently suspended Bannon after he suggested that certain U.S. officials like Anthony Fauci should be beheaded, violating the platform’s policies against the “glorification of violence”. YouTube later removed the podcast’s channel in January 2021 for violating the platform’s policies on misinformation.

During the interview, one of the primary claims made by Malone is that COVID-19 vaccination will make SARS-CoV-2 more dangerous due to a mechanism called antibody-dependent enhancement (ADE). ADE occurs when antibodies don’t block a virus from infecting cells, but instead improve its ability to infect cells. This phenomenon increases the risk that individuals with preexisting antibodies from previous natural infection or vaccination develop more severe disease when exposed again to the virus.

Claims that COVID-19 vaccines would cause ADE started circulating on social media platforms early in the pandemic. Such claims are baseless and actually contradict scientific evidence, as we explain below.

The first reports of ADE came from patients with dengue virus infections. Researchers observed that previous infection with one of the four serotypes of the virus often worsened the symptoms of the disease if the person had a second infection with a different serotype. This phenomenon caused problems in the development of vaccines for dengue, respiratory syncytial virus (RSV), measles, and some coronaviruses, including severe acute respiratory syndrome (SARS)-associated coronavirus (SARS-CoV-1) and Middle East Respiratory Syndrome Coronavirus (MERS-CoV).

The result of this awareness is that the COVID-19 vaccines developed so far showed no signs of ADE in animal studies, clinical trials, or during vaccine rollout. Real-world studies further demonstrate that all FDA-authorized COVID-19 vaccines are highly effective in preventing severe disease and death[5,6]. Furthermore, infections in fully vaccinated individuals are rare and tend to produce milder symptoms than in those who didn’t receive the vaccine[6,7]. This is exactly the opposite of what one would expect if ADE was occurring.

During the interview, Malone further claimed that SARS-CoV-2 variants are “most likely developing in the people who have been vaccinated”, increasing the risk of ADE. As Health Feedback explained in previous reviews, current evidence doesn’t support the claim that COVID-19 vaccines lead to more viral variants, and actually contradicts it.

Each time the virus replicates, it can introduce mutations, which are changes in its genetic sequence. These changes are random and a natural process in viral evolution. The more infections the virus causes, the more times it replicates, increasing the likelihood of generating new mutations that might spread as new variants. Some studies suggest that long-lasting infections also favor the development of new mutations.

Because COVID-19 vaccines effectively prevent infections, hospitalizations, and deaths, they also make it less likely for the virus to mutate and for new variants to spread. In contrast, unvaccinated individuals are more likely to get infected and develop severe COVID-19, increasing the chances of new variants to emerge. If COVID-19 vaccines did lead to more variants, those regions with higher vaccination rates would observe more new variants circulating among the population. This isn’t the case. In fact, all current variants of concern emerged in 2020, before the vaccination campaigns began.

According to Malone, NBC News reported that this change in guidance responded to new data suggesting that people vaccinated against COVID-19 had more virus than unvaccinated individuals. Malone also shared this claim in a tweet, together with a screenshot from a USA Today article echoing that of NBC News. USA Today removed this part of the article in a later update. However, neither NBC News nor USA Today stated what Malone claimed they did. Instead, what they reported:

“The Biden administration is issuing new guidance Tuesday recommending indoor mask use in areas with high transmission rates, after reviewing new data suggesting fully vaccinated individuals are not just contracting Covid-19, but could also be carrying higher levels of virus than previously understood and potentially able to infect others, according to multiple sources close to the discussion.” — NBC News.

“NBC News, citing unnamed officials aware of the decision, reported it comes after new data suggests vaccinated individuals could have higher levels of virus and infect others amid the surge of cases driven by the delta variant of the coronavirus.” — USA Today.

The medicinal chemist Derek Lowe conducted a a detailed analysis of ADE in the context of COVID-19 vaccines in his blog on Science Translational Medicine. He also discussed previous research on ADE in different diseases and the mechanisms that can lead to the phenomenon.