CLAIM
“Flu cases down by 95%” between 2019 and 2020 for the weeks 40 to 41; flu is being diagnosed as COVID-19, leading to fewer flu cases being recorded
VERDICT more about the rating framework

DETAILS
Inaccurate: The Ingraham Angle claims that the source of the data presented is the CDC; however, the numbers do not match the U.S. CDC’s flu surveillance data for 2019.
Misleading: Health authorities observed lower than usual flu activity for this time of the year. Similar to COVID-19, flu spreads through respiratory droplets. Widespread adoption of public health measures to reduce the spread of COVID-19 have likely also reduced the spread of flu.
Inadequate support: The claims are based on flu surveillance data from the most recent weeks in 2020, which may be incomplete, as aggregating data takes time. The current flu season just started, therefore, it is premature to conclude that flu cases have decreased by 95%.
KEY TAKE AWAY

Health authorities have observed lower than usual flu activity in October 2020, which is generally the month in which flu season begins. The widespread adoption of public health measures to reduce the spread of COVID-19, such as wearing masks and physical distancing, likely contributed, in part, to the lower flu activity observed so far this year compared to previous years. However, scientists emphasize that preparing for the flu season is still important, due to the uncertainty posed by the COVID-19 pandemic. Furthermore, the flu season has only just begun at the time of this review’s publication, hence it is premature to conclude that flu cases have indeed decreased compared to last year.

Facebook posts showing a screenshot from the 16 October 2020 episode of The Ingraham Angle, a television talk show on Fox News Channel, went viral in mid-October 2020. The screenshot displays the caption “flu cases down 95%” and purportedly shows the number of flu cases between weeks 40 and 41 for 2019 and 2020 (see example). This screenshot of Fox News footage in turn became the springboard for different misleading claims, including allegations that “COVID-19 cured the flu,” that flu “is being diagnosed as COVID-19,” and that the pandemic is “overblown.” Other posts take on a conspiratorial nature, claiming the number of flu cases is evidence that the pandemic is a hoax or that the number of flu cases has been manipulated to create demand for a COVID-19 vaccine.

As these claims are based on the figures displayed in the screenshot, our first step was to verify the accuracy of the number of flu cases presented. We examined flu surveillance data collected by the U.S. Centers for Disease Control and Prevention (CDC) from weeks 40 to 41 in October for 2020 and past years. According to the CDC, the flu season is defined thus:

“‘Flu season’ — as determined by elevated flu activity – also varies from season to season. During most seasons, activity begins to increase in October, most often peaks between December and February and can remain elevated into May. The flu season is said to have started after consecutive weeks of elevated flu activity is registered in the various CDC influenza surveillance systems.”

The CDC monitors flu activity in the country in several waysincluding virologic surveillance, which involves laboratory testing of patient samples at both clinical and public health laboratories. Such testing confirms whether samples are positive for influenza and characterizes the subtype of flu virus in a sample:

However, scientists can estimate the actual number of flu cases using mathematical models. These estimates show that the actual number of cases are much higher than the number of positive tests from clinical and public health laboratories. Indeed, from 1 October 2019 through 4 April 2020, the CDC estimated that there were 39,000,000 – 56,000,000 flu illnesses in the U.S. At minimum, this translates to an average of approximately 1.4 million illnesses per week during that period.

The number of flu cases reported by the Ingraham Angle (1,251 in 2019 and 61 in 2020) are inaccurate, based on flu surveillance data gathered by clinical and public health laboratories for the CDC (see figure below). 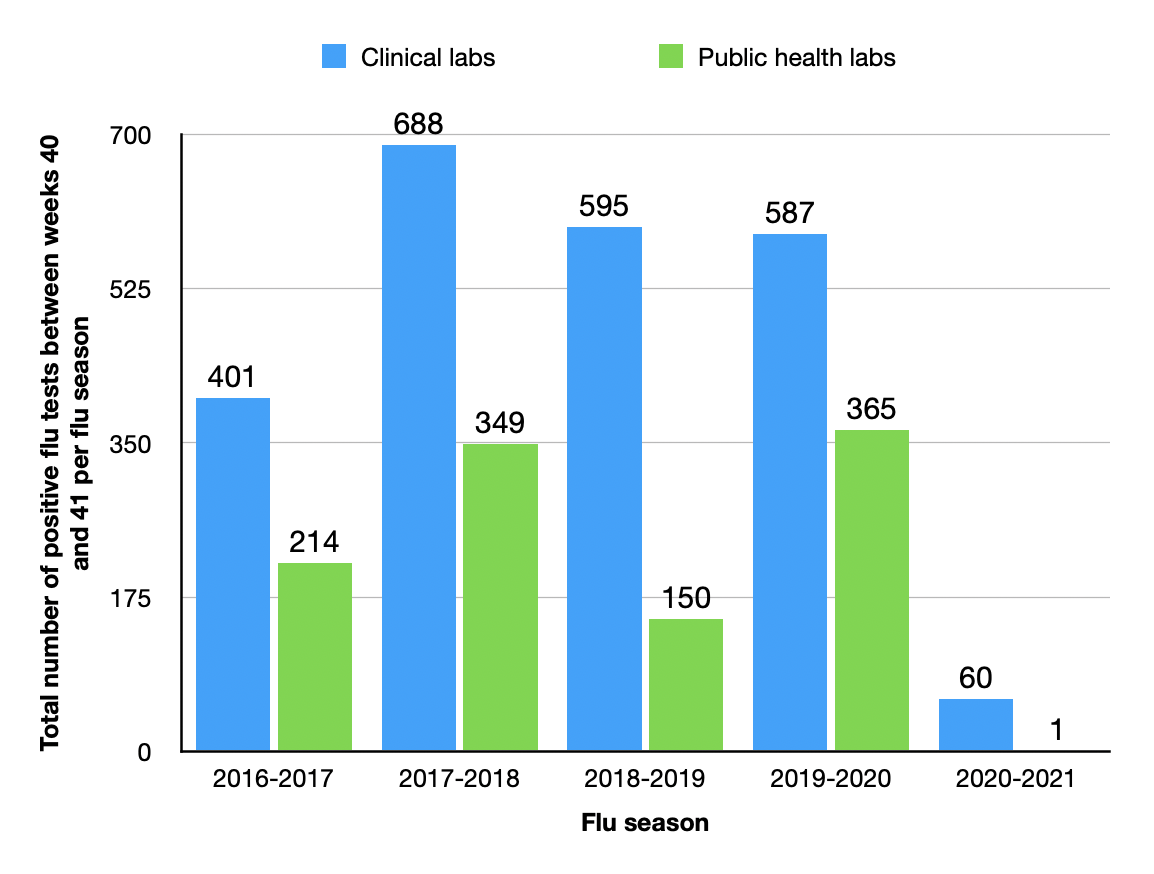 Figure 1. The number of tests that were positive for flu reported between weeks 40 and 41. Data from previous flu seasons apart from the 2019-2020 and 2020-2021 flu season are provided for comparison. Blue bars indicate positive tests reported by clinical laboratories, while green bars indicate positive tests reported by public health laboratories. Data retrieved from the U.S. CDC’s FluView on 20 October 2020.

First, the Ingraham Angle reported there were 1,251 confirmed flu cases between weeks 40 and 41 in 2019, which is higher than the CDC testing data, even though the screenshot lists the source of the data as the CDC.

Second, the Ingraham Angle reports the number of cases for weeks 40 and 41 in 2020 as 61. This number was likely obtained by adding the tests from clinical and public health laboratories, and this approach may also have been applied to the 2019 statistics. But the CDC already pointed out that the data should not be used in this manner:

One caveat of using data from the most recent weeks in 2020 is that the data may be incomplete. The CDC also highlights this caveat here: “The data presented each week are preliminary and may change as more data is received.” The figures reported by the Ingraham Angle are from weeks 40 and 41, while the latest numbers available were gathered at week 43, between 18 and 24 October 2020.

Yet another caveat is that this year’s flu season has only just started. It is therefore too early to conclude with certainty that flu cases have indeed decreased compared to previous years. Overall, the claims made in these Facebook posts are based on inaccurate numbers reported by the Ingraham Angle.

Although the figures presented by the Ingraham Angle are inaccurate, both the CDC and the World Health Organization (WHO) have indeed noted lower than usual flu activity for this time of the year.

But some have claimed that a reduction in flu cases is simply the result of “manipulation of data.” Some social media users have likewise interpreted Facebook posts, such as this one containing a tweet that “Flu cases are down 98% across the globe,” as an indication that the number of flu cases has been manipulated. Such claims and interpretations are not credible and lack significant context, as they fail to consider that the dynamics of flu activity have likely changed, in part, as a result of implementing public health measures to reduce the spread of COVID-19. These measures include the use of face masks, physical distancing, and isolation, which likely also limits the spread of flu as both diseases are spread via respiratory droplets. Indeed, the WHO has cautioned that:

“The current influenza surveillance data should be interpreted with caution as the ongoing COVID-19 pandemic [has] influenced to varying extents health seeking behaviours, staffing/routines in sentinel sites, as well as testing priorities and capacities in Member States. The various hygiene and physical distancing measures implemented by Member States to reduce SARS-CoV-2 virus transmission have likely played a role in reducing influenza virus transmission.”

In fact, scientists already observed shorter durations of flu activity in various countries around March 2020 during last year’s flu season (2019-2020), a few weeks after public health measures were implemented to reduce the spread of COVID-19. As reported in this Nature news article:

“Local data from the state of New York show a similar pattern. Although the flu season started a few weeks earlier than usual there, the rate of cases fell sharply and the season ended five weeks early. In Hong Kong, the 2019–20 influenza season was 63% shorter than those of the previous five years, and the number of deaths from lab-confirmed flu was 62% lower. A similar decline was seen during the 2003 epidemic of the related coronavirus that causes SARS (severe acute respiratory syndrome).”

Another news article by Science reports a similar phenomenon in countries in the Southern Hemisphere:

“Apparently, travel restrictions, school closures, social distancing, and mask wearing have all but stopped flu from spreading in South Africa. Similar stories have emerged from Australia, New Zealand, and parts of South America.”

This article in the CDC’s Mortality and Morbidity Weekly Report also highlights the same observation[1]. However, it also cautions that this phenomenon should not be taken for granted and that preparing for the flu season is still important:

“[I]n light of the novelty of the COVID-19 pandemic and the uncertainty of continued community mitigation measures, it is important to plan for seasonal influenza circulation this fall and winter. Influenza vaccination for all persons aged ≥6 months remains the best method for influenza prevention and is especially important this season when SARS-CoV-2 and influenza virus might cocirculate.”

In summary, the numbers of flu cases reported by the Ingraham Angle as coming from the CDC are inaccurate, as they do not match the flu surveillance data provided by the CDC. Facebook posts that attempt to explain the lower number of flu cases as the result of flu cases being either deliberately or accidentally misdiagnosed as COVID-19 for various motives are incorrect and misleading, as they fail to account for other factors that influence the spread of viral respiratory diseases in general, such as the widespread adoption of public health measures to reduce the spread of COVID-19.