Four scientists analyzed the article and estimate its overall scientific credibility to be neutral to high. more about the credibility rating 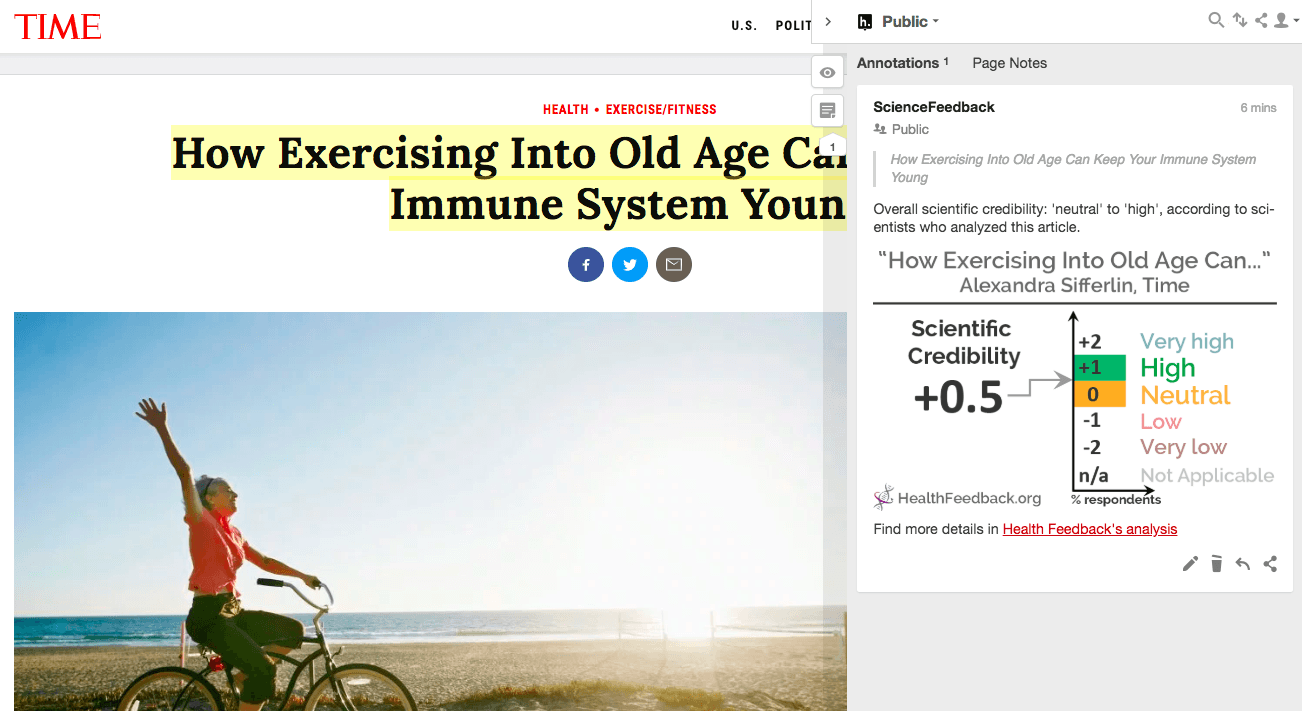 This article in Time Magazine reports the results of a research study by scientists at the University of Birmingham. In this study, researchers compared different types of T cells (a group of immune cells involved in various functions such as fighting infection and cancer) between active masters cyclists (55 – 79 years old), inactive ageing adults, and young adults in their twenties. The article describes how active masters cyclists had “higher levels of T cell activity” compared to inactive ageing adults, and similar levels of T cell activity as young adults. These results suggest that maintaining regular physical activity throughout life helps to maintain function of the immune system during ageing, which could play a role in preventing infection and perhaps even cancer.

Scientists who reviewed the article found it to be mostly accurate, reflecting the current understanding of how physical activity contributes to healthy ageing. Reviewers did find a few inaccuracies (such as conflating the measurement of cell number with the measurement of cell function). Providing additional details, such as the limitations of the study (for instance, the type of T cell activity measurement used in the study) could also better enhance readers’ understanding of the science involved in this research.

You can read the Time article here.

[This is part of a series of reviews of 2018’s most popular health and medicine stories on social media. This article has been shared more than 550,000 times.]

James E Turner, Senior Lecturer (Department for Health), University of Bath:
The overall message of the article is a fair reflection of current scientific opinion that being physically active regularly throughout life most likely promotes healthy ageing of the immune system. However, it is very unlikely that being regularly active prevents ageing of the immune system, although it may slow or limit some of the negative effects. These concepts are outlined in two of my review articles[1,2].

Although the article is not misleading, some statements are not strictly accurate. This is most likely due to the interpretation the author has made and perhaps her understanding of the original research article by Duggal et al.[3] Of course, there is a trade-off between interpreting scientific information accurately and summarising the findings with simple messages to a non-scientific audience. However, the author has misunderstood the main measurements in the research article, which are largely related to counting specific types of cells. The main findings were that cells characteristic of a “younger” immune system, were found to be higher in frequency among masters athletes compared to healthy elderly adults and were at similar levels to younger adults.

In addition, cells characteristic of an “older” immune system, were found to be fewer among masters athletes compared to healthy elderly adults and were at similar levels to younger adults. The functional work described in the research article (i.e. T cell activity) is firstly, a very small part of the work. Secondly, it is an isolated/selected measurement of many other alternatives to assessing T cell activity. Thirdly, these experiments have only been conducted on a small subset of some T cells. Again, these measurements of “T cell activity” are really providing a numerical count of cells that are producing a specific cytokine, and do not represent the magnitude of activation per cell (see Annotations below for more details).

I should emphasise that the study by Duggal et al. is robust. The population of volunteers studied has been very carefully and objectively characterised. The immunological measurements are fairly robust (although there is room for improvement), but they certainly provide an overall assessment of the immune profile of the volunteers.

On the whole, the article’s message is probably a good summary of current thinking in the field and should be communicated to non-scientific audiences as part of promoting a healthy lifestyle. However, the accuracy of specific statements and the interpretation of the original article could be improved.

Luís Rama, Assistant Professor (Faculty of Sport Sciences & Physical Education), University of Coimbra:
The results of the reported research are in line with our own data[1], and confirm the advantage of past sports activity in the immune response in masters athletes (over 65). Probably the exercise patrimony (past experiences in this domain) will be helpful to understand the role of active life in the immune response during ageing.

To put it another way, the article is written in a manner that gives the impression that the function/defense processes of the cells were tested, which is not the case. The study looked at a comprehensive mixture of markers that essentially demonstrated that the level/availability of T cells was preserved in these very well-trained older cyclists to a similar degree seen in younger people. This is a very important finding as these cells are pivotal in viral defense, but this is not the same as ‘T cell activity’.

Therefore, while the overall message of the article is correct, the specific scientific detail is inaccurate.

Christopher Labos, Associate, McGill Office for Science and Society:
No major flaws, but a fairly superficial article that restates the results of a single study without putting it into a broader context. Given the problem with reproducibility in science, referencing a single study is probably not ideal for medical journalism.

“The study authors then compared the cyclists to people in their same age group who did not exercise regularly, as well as younger adults between ages 20 and 36. Not only was T-cell activity higher in the active adults than the inactive men and women, but the cyclists were also producing the same level of T-cell activity as young adults in their 20s.“

James E Turner, Senior Lecturer (Department for Health), University of Bath:
In terms of simplifying very complex immunological findings to a non-scientific audience, this is a fair summary, as a non-scientific audience will assume that higher T cell activity is beneficial, and they will assume the scientific article has measured this process robustly. The quote would be much more accurate if it focused on the number of cells that represent a “young” (i.e. naïve T cells) and “old” immune system (i.e. memory T cells exhibiting characteristics associated with ageing), as opposed to “T-cell activity”.

It should be noted that while high T cell activity can be good in some contexts (e.g. if T cells are trying to kill an infected cell), it can also cause complications (e.g. high production of a protein called interleukin-17 by T cells is associated with autoimmune conditions, in which the immune system attacks the body). Excessive production of immunosuppressive proteins by T cells can also impair immune response (e.g. to infections).