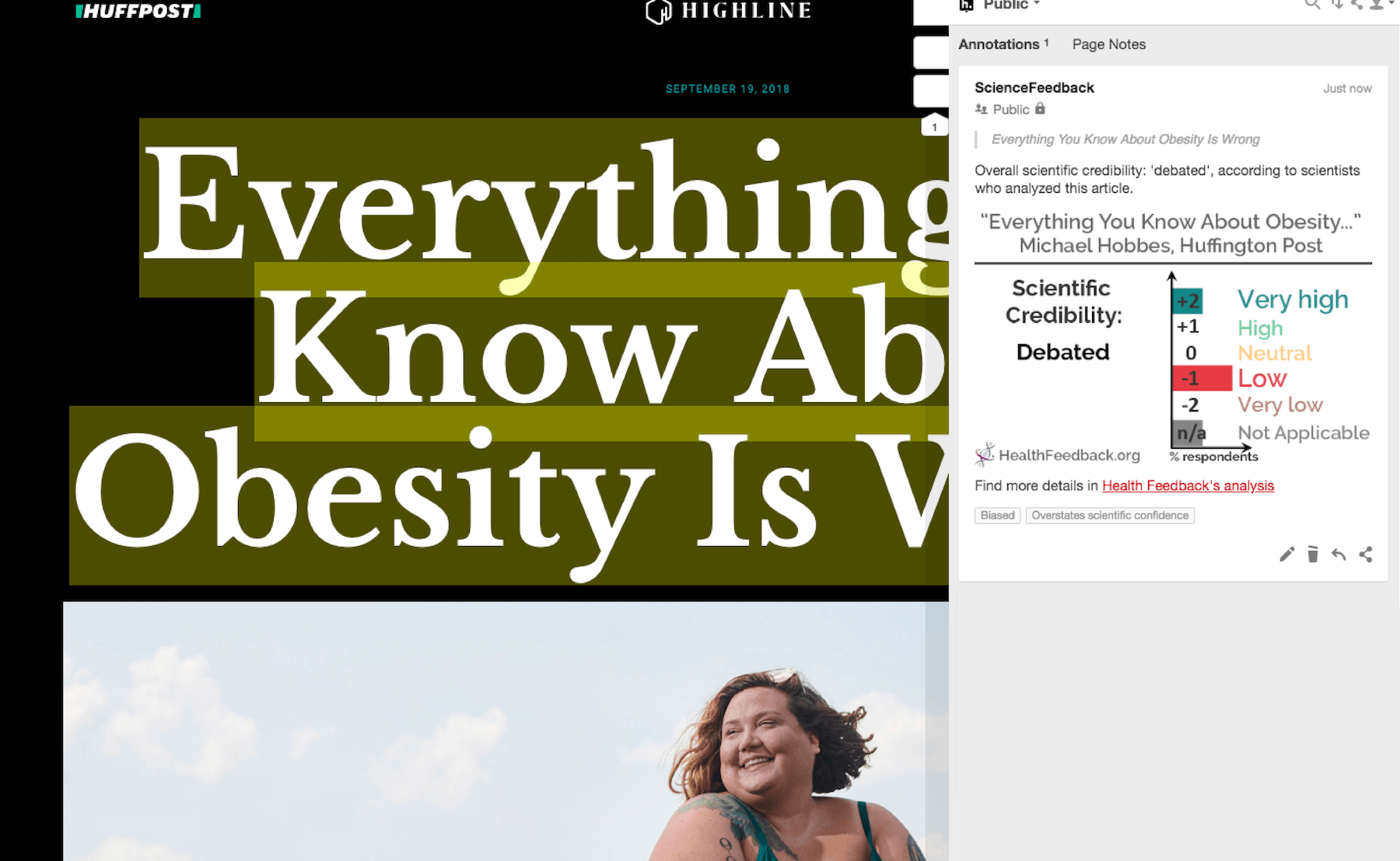 This article by Huffington Post describes the daily struggles of obese people as a result of ignorance and contempt from strangers, loved ones and even their own doctors. It highlights several ways in which society and the medical establishment have failed to help the obese, in matters ranging from personal relationships to health policies, and cites scientific studies to support its views and conclusions.

Scientists who reviewed the article acknowledged that it addressed an important and pressing issue in tackling the problem of obesity, and that it generally cited scientific findings accurately. As such, the rating for the article’s scientific credibility has been highly variable, as can be seen in individual ratings. However, some reviewers noted a critical failure of the article to place the (accurately-cited) scientific findings in the appropriate context and its overstatement of scientific confidence (for example, its statement that weight loss leads to lower basal metabolic rate), resulting in flawed conclusions (a lower basal metabolic rate reduces your body’s ability to use energy, so that it is impossible to lose weight, making any weight loss attempts futile), which is misleading to readers. Some reviewers also pointed out the bias present in the article, particularly in its tendency to discuss only the negative aspect of obese people’s interactions with society and the medical establishment. It glossed over the fact that several medical contributions such as bariatric surgery have been effective at helping obese people, and that health policies such as sugar taxes have been implemented to help promote healthier living and weight loss in the population.

[This is part of a series of reviews of 2018’s most popular health and medicine stories on social media. This article has been shared more than 600,000 times.]

Duane Mellor, Senior Lecturer, Coventry University:
This is overall an interesting piece looking at the lived experience of having a higher body weight, which is needed in a climate that can be increasingly hostile and stigmatising. This is the reason why I thought the scientific aspects are somewhat ungrounded and lacking in context, and even unnecessary in an article such as this.

The key scientific claims in the article are a 17% suppression of metabolism with just a 3% weight loss. It is true that weight loss will reduce basal metabolic rate, as there is basically less tissue that requires ‘feeding’. However, the nature of the weight loss – whether it is wasting of muscle or loss of fat – is key. Incorporating physical activity to maintain and increase muscle mass can reduce any effect on metabolic rate and even offset it by increasing energy expenditure.

The point about metabolism is then linked to an effect on hormones. There is some evidence that appetite hormones change[1], but any change in body temperature that occurs is exaggerated: as, if there would be a significant drop in body temperature significantly drops that is dangerous to health and potentially leads to hypothermia!

The final point is the idea that “keeping weight off means fighting your body’s energy-regulation system”. This again loosely refers to the ‘set-point’ hypothesis, however some individuals can maintain weight loss well[2], although it is not easy and requires support as our food and physical activity environment does not always help.

So, this article has an important sociological role, looking at body weight in a way that does not blame the individual. The answers perhaps lie in supporting people through having better food environments and culture, so that healthier choices are the easier ones to go for. Then through diet and physical activity, people can focus on improving health and not losing weight. The article should have perhaps avoided including biomedical evidence and simply focused on the depth of human experience.

Christopher Labos, Associate, McGill Office for Science and Society:
This article raises a significant issue about obesity and the public health problem it represents. However it tends to contradict itself a lot, at once saying that it is impossible to lose weight (by citing studies that show “95 to 98 percent of attempts to lose weight fail” and that “the reasons for this are biological and irreversible”), and then saying that the medical community is not doing the right things to help people lose weight (“Doctors are supposed to be trusted authorities, a patient’s primary gateway to healing. But for fat people, they are a source of unique and persistent trauma”). It also fails to mention that many medical therapies and bariatric surgeries can be helpful. It also doesn’t mention the attempt to pass sugar taxes to get people to curb sugar consumption. Overall, the article seems to be about casting blame and bashing doctors rather than actually exploring the issues and potential solutions.

Leigh Jones, Head of Training, Oxford University Clinical Research Unit:
Personal stories and anecdotes make up the bulk of the article in a general discussion surrounding the biological and social causes of obesity. While the behavioral content may be more valid, references to biological, scientific content are inconsistent and vary in credibility.

One of the major contentious issues relates to discussion around the metabolically healthy obese, where the author fails to reference any of the meta-analyses showing that while this may be temporally true, the likelihood of future metabolic disease (e.g. diabetes) is still significantly higher in those who are overweight[1]. In its critique of meal-replacement diets, there is no mention of the recent DiRECT trial in the UK[2] which showed successful reduction in weight and Type 2 diabetes remission after a one-year follow-up[3]. While the article rightly points out that Americans are eating less calories than 15 years ago, the size of this reduction (around 9%) is unlikely to translate to a meaningful difference in nationwide weight; a point which is ignored by the author.

Overall, the clickbait headline and controversial subtitle introduce an article which may be well-meaning but is misleading to the reader.

“One effect of weight bias is that it actually makes you eat more. The stress hormone cortisol—the one evolution designed to kick in when you’re being chased by a tiger or, it turns out, rejected for your looks—increases appetite, reduces the will to exercise and even improves the taste of food.“

Yoni Freedhoff, Assistant Professor, Bariatric Medical Institute:
There is evidence that weight bias is associated with worsening obesity, and increased cortisol certainly may be a plausible contributor, but I’m not certain we are able to speak beyond correlation, now or in the future.

“Research has shown that 95 to 98 percent of attempts to lose weight [via dieting] fail and that two-thirds of dieters gain back more than they lost.“

Jason Fung, Nephrologist, IDM Clinic:
Specifically regarding the statement that 95-98% of diets fail, that is correct. Several studies[1] have shown this figure to be in the right ballpark. Further, clinical experience with patients also suggests this is largely correct.