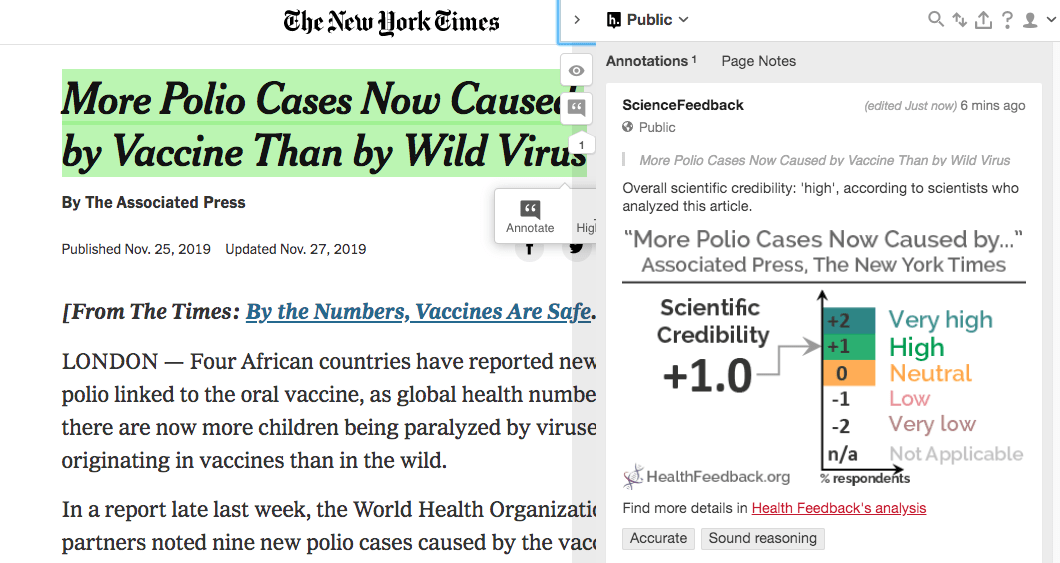 This New York Times article reports on the growing number of vaccine-derived polio cases, particularly in Africa, based on a report by the Independent Monitoring Board of the Global Polio Eradication Initiative published in November 2019. The article was published in late November 2019 and received more than 90,000 interactions on Facebook (including more than 18,000 shares) at the time of this review’s publication. Images of the article’s headline alone – without additional context – have also gone viral on Facebook.

Scientists and physicians who reviewed the article found its content to be accurate and based on sound reasoning. The article included a careful explanation that vaccine-derived polio only occurs in rare cases. However, the reviewers suggested that more information could have been included to provide greater context and perspective about the vaccine, such as the fact that the oral polio vaccine has been critical to efforts in eradicating the disease.

Polio is caused by a virus that spreads mainly through the oral-fecal route, and is therefore associated with poor sanitation. Infection can quickly reach the brain and spinal cord, leading to paralysis, which can be temporary or permanent. Paralysis involving muscles of respiration—which comprises about 5 – 10% of paralysis cases—can lead to respiratory arrest and death.

The polio vaccine can be administered in two ways: one is the inactivated polio vaccine (IPV), which uses killed wild poliovirus that is no longer infectious. It is more expensive and requires trained healthcare staff to administer it via injection. Developed countries such as the United States and the United Kingdom currently use only IPV.

The other polio vaccine is administered through drops taken orally (oral polio vaccine, OPV). The vaccine contains a live but weakened strain of poliovirus, is less expensive than IPV, and can be administered by those without medical training. These characteristics make it suitable in settings where adequate healthcare facilities are not readily accessible to many people. In addition to protecting vaccinated individuals, OPV also confers protection on others around them. Vaccinated people shed the weakened virus after vaccination, thus exposing unvaccinated individuals and passively transferring immunity to them.

However, in conditions where polio vaccine coverage is low and many individuals within the community are not vaccinated, the weakened virus from the vaccine spends prolonged periods of time being passed from one unvaccinated person to the next. Over time, the virus can mutate and, in rare cases, become virulent, which means it is able to cause disease in people. The World Health Organization (WHO) explains this process in greater detail here.

It is important to note that the mutated virus is not the same virus as that contained in OPV, hence the article’s headline is misleading. It can be interpreted to mean that these polio cases arose in children after they were vaccinated. This is incorrect. These polio cases are not caused by the vaccine, but by vaccine-derived polioviruses (VPV) and occur only in unvaccinated children.

The potential to misinterpret the headline has not gone unnoticed by certain Facebook groups known to express anti-vaccine views. Several of their posts show either the article’s headline without context or add false claims about vaccines. Individuals with known anti-vaccine views are also leveraging this news to call for a halt to OPV, as this Washington Times article reported.

The headline of this article by The Guardian (“Polio outbreaks in Africa caused by mutation of strain in vaccine”) provides a much more accurate summary of these developments. From the Guardian’s report:

“Dr Pascal Mkanda, head of the WHO’s Polio Eradication Programme, said the latest outbreak was directly linked to low vaccination rates. The rise in vaccine-derived polio cases is caused by a mutated form of the disease found in faecal matter that targets children who have not been vaccinated, he said.

‘What we must do is extend the coverage of immunisation so that polio can no longer continue to survive,’ said Mkanda.”

You can read the original New York Times article here.

Kathleen O'Reilly, Assistant Professor, London School of Hygiene & Tropical Medicine:
The data supporting the article can be found here at the Global Polio Eradication Initiative (GPEI).
[Editor’s note: More background information on vaccine-derived poliovirus can also be found on the GPEI website. This video also explains how vaccine-derived poliovirus arises and how to stop them.]

Walter A. Orenstein, Professor, Emory University School of Medicine:
The article is accurate, although I have not seen the Independent Monitoring Board (IMB) report cited, so I cannot evaluate the accuracy of the synopsis of the IMB report [the IMB in this case is a group set up by the WHO to monitor polio eradication] . Because of the short length of the article, they were not able to put in perspective how far we have come in polio eradication. For example, in 1988, when the eradication effort began, there were an estimated 350,000 cases of paralytic polio in that year alone. So far, this year we have had less than 200 cases of wild polio virus and less than 200 cases of vaccine-derived poliovirus.

Angéline Rouers, Senior Research Fellow, A*STAR Infectious Diseases Labs:
The content of the article is correct: attenuated polio strain type 2 contained in the oral vaccine can – in very rare cases – mutate and cause disease in under-immunized persons. However it might be good to specify that if the vaccine coverage is good, this will not happen (so the vaccine coverage has to be maintained, since it has prevented 13 million cases since 2000, according to the WHO).

The title of the article is also misleading: it’s not the vaccine causing disease (the children immunized by the vaccine are very well-protected!), it is the attenuated strains from the vaccine in areas of inadequate sanitation that can spread, mutate and cause disease in children who don’t receive the vaccine.