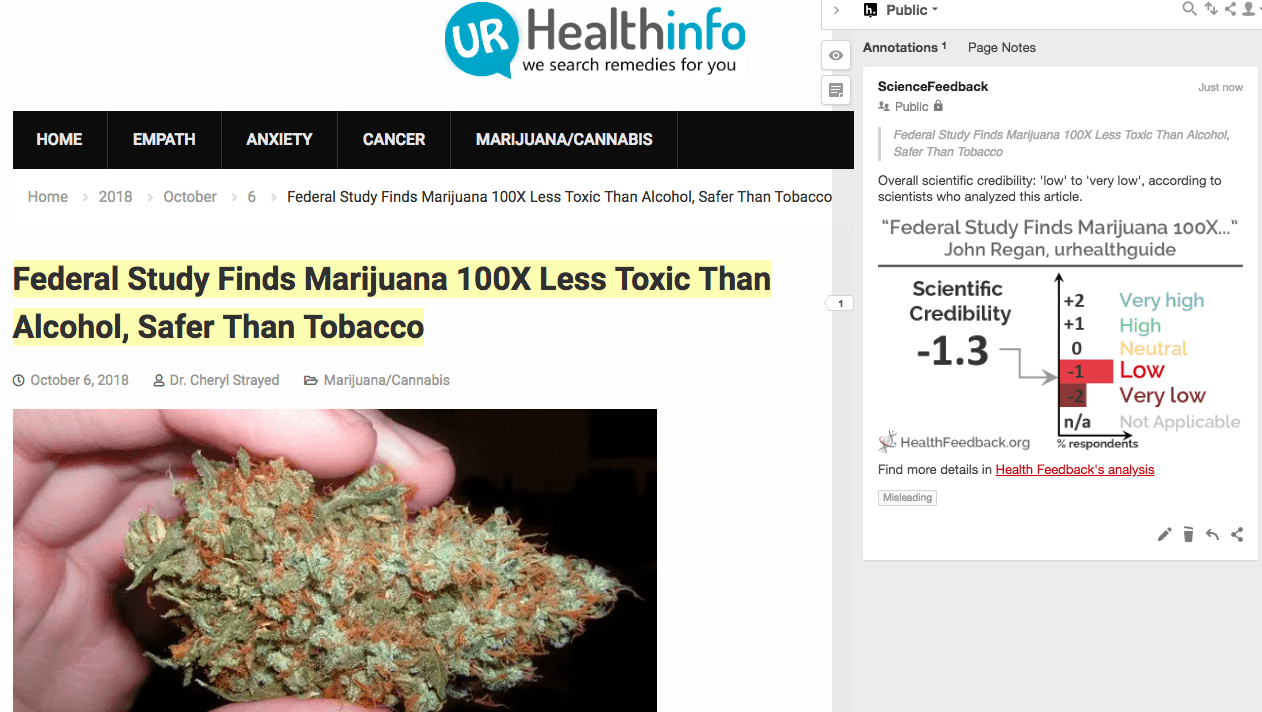 This widely shared article propagates the view that marijuana (also known as cannabis) is safe to use, and that fears regarding its use are exaggerated. The article supports its view by citing a single study which assessed the risk of marijuana use to that of other drugs of abuse such as alcohol, tobacco and heroin. This study found that marijuana’s risk was ranked lowest among all tested substances. Based on this result, the article then concludes that marijuana is actually safer than alcohol. The article also suggests this study to be superior to that of other toxicological studies because it used a different measure called Margin of Exposure, which the article claims “is a better judge of how risky a substance can be”.

Reviewers found that the article presented an unbalanced view of the purported safety of marijuana and its benefits. They pointed out that the article focused on discussing the potential health benefits of marijuana – of which little is known – without also providing the reader with the same amount of information on the negative effects of marijuana, such as intoxication and various psychological symptoms, which have been well-documented. They also explained several flaws in the methodology of the cited study, such as the fact that it used animal toxicology data and that Margin of Exposure is not an appropriate measure of harm from chronic use, which is the main concern with cannabis.

You can read the original article here. [This link is to an archived version of the article. The website that published this article urhealthguide.com is not online anymore, although many copies of the article can still be found on sites including ehealthmagz.com, urhealthinfo.com, ushealthzone.com]

[This is part of a series of reviews of 2018’s most popular health and medicine stories on social media. This article has been shared more than 1 million times, and is the #1 most viral health article of 2018.]

Andrew J Saxon, Professor (Department of Psychiatry and Behavioral Sciences), University of Washington:
This article is not written in a dispassionate, scientific style. It is written like an Op-Ed that is pushing a certain viewpoint, in this case the idea that cannabis is quite safe and has medical value. The headline of this article [“Federal Study Finds Marijuana 100X Less Toxic Than Alcohol, Safer Than Tobacco”] is based primarily upon a single study. Generally, the article describes the study accurately, but does not critique the study methodology. The study uses animal toxicology data to determine whether humans typically use close to the amount of the substance that is toxic in animals. This approach is not a rigorous way to determine the harms of a substance.

The basic finding that cannabis is less acutely toxic than other substances that humans misuse is accurate and widely accepted, but acute toxicity is only one way to characterize the harms of a substance. The article fails to point out that only very limited, low-quality evidence supports the use of cannabis for treating chronic pain. The article also fails to describe the potential harms of cannabis. Although it does not cause fatal overdose, it does cause intoxication and impairment, and driving under the influence is dangerous. Also, both acute and chronic use of cannabis cause cognitive impairment which can interfere with an individual’s safety and productivity. Thus, the article reads like a paean to cannabis and does not present a balanced view of its potential benefits which have yet to be conclusively demonstrated, and its known harms which have been well-documented.

David A Gorelick, Professor (Department of Psychiatry), University of Maryland:
Margin of Exposure (MOE) is a valid measure of acute toxicity, but is largely irrelevant for harms from chronic use, which is the main concern about cannabis use. The article should have clarified that the MOE argument addresses only acute toxicity/harms. The MOE approach is also falsely claimed to be “drastically different” from approaches that evaluate the relationship between 2 factors, e.g. substance use and mortality. MOE also evaluates the relationship (a ratio, in this case) between 2 factors: estimated average human intake and the lowest toxic dose in animals.

Mehrak Paydar, Research Associate, The Scripps Research Institute:
The article is not balanced. The most important side effects of marijuana, such as memory problems, anxiety (paranoia), psychosis, panic, hallucinations, lowered reaction time, problems with coordination and impaired driving are not even mentioned.

There is also no rationale for concluding that if a drug is less toxic than another drug, it can be considered safe! Although the comparison of the Margin of Exposure between marijuana and alcohol is informative, it is not an appropriate indicator of marijuana’s safety.

“There have also been studies on the adverse effects of marijuana. One of these was published in mid-2014, focusing the negative health effects of smoking marijuana, particularly on the increased risk for lung cancer.“

The only statement about adverse effects of cannabis is actually false. Good-quality studies find that cannabis does NOT increase risk for lung cancer[1].