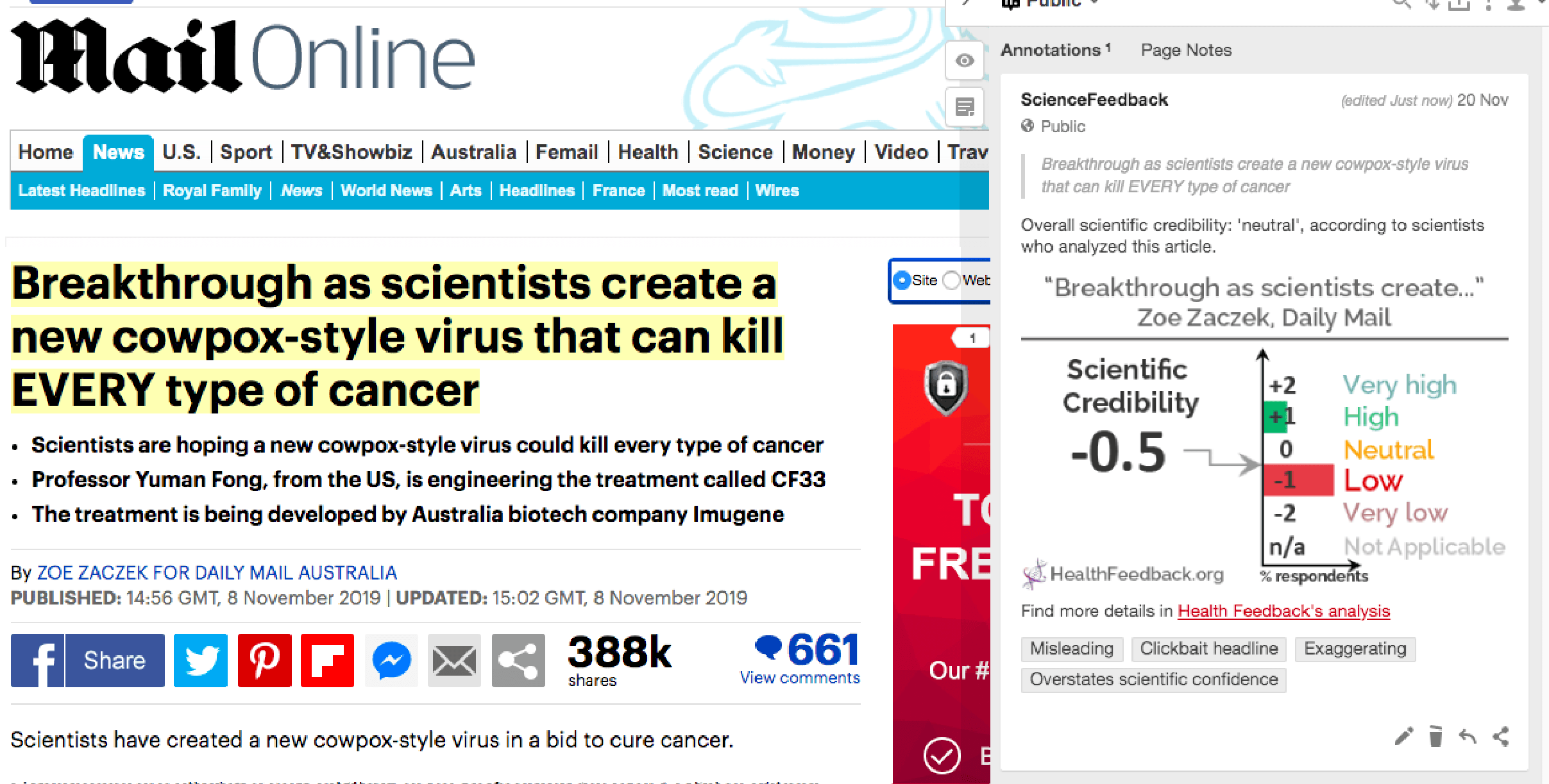 This Daily Mail story, published in early November 2019, claims in its headline that scientists have created “a new cowpox-style virus that will cure EVERY type of cancer”. This report appears to have originated from a similar Daily Telegraph story. The Daily Mail report quickly went viral on Facebook and has already received an estimated 1 million interactions, including more than 220,000 shares. The story also received significant coverage by news outlets in other languages.

The conclusions reported in the article are based on the peer-reviewed findings of a research group led by Professor Yuman Fong, a surgical oncologist at the City of Hope Comprehensive Cancer Center in California. The group found that a virus they had developed from the cowpox virus, which they named CF33, was able to kill certain types of cancer cells in petri dishes, as well as tumors growing in mice[1,2,3,4].

Scientists who examined the Daily Mail’s coverage of the study found the headline to be highly misleading and an exaggeration of the actual research findings. They explained that while the work by Fong and his group is very promising, it is still in the preclinical stages and has not been tested in human clinical trials. Therefore, the efficacy of this approach in people has yet to be determined. Although the article includes this caveat, the headline does not.

The article also lacks a commentary on the research findings by relevant cancer experts who could have helped explain the results more objectively and accurately and could have provided additional background and context to help readers better understand the science.

For a detailed description of how CF33 was developed, please see Dr. Eva Hadadi’s comments below.

You can read the original Daily Mail article here.

NOTE (22 NOV. 2019):
After our evaluation was published, the Daily Mail Australia corrected the article’s headline, changing it from “Breakthrough as scientists create a new cowpox-style virus that can kill EVERY type of cancer” to “Scientists to trial new ‘cowpox-style’ virus that killed cancers in lab tests on humans”. It also removed misleading content from the article (link to an archived version).

Eva Hadadi, Postdoctoral Fellow, French National Institute of Health and Medical Research:
The article is an inaccurate and unbalanced report with a clearly clickbait title. The article seems to be based only on the report from The Daily Telegraph, without using any scientific sources (e.g. research papers or Imugene company website) to check the information.

The statement saying that the novel oncolytic virus CF33 “can kill every type of cancer” is exaggerated and incorrect. Importantly, none of the original scientific papers from the lab of Professor Yuman Fong claims that their novel virus CF33 can kill every type of cancer. Prof. Fong’s group created the CF33 virus by infecting a cell line with 9 different virus strains, which are so-called parental viruses. Within the cells, these parental viruses were able to randomly exchange their genetic information and create new “daughter” viruses. Out of 100 “daughter” viruses, CF33 was the most potent in killing cancer cells. In the original scientific paper, the authors only showed that two “daughter” viruses (CF33 and CF17) were more efficient in killing solid cancer cell lines compared to the parental viruses[1]. This data is not enough to conclude that the CF33 virus is able to kill any type of cancer.

While the CF33 treatment indeed showed promising results in pancreatic[1], lung[2], colon[3] and triple-negative breast cancer[4] cell lines and mouse models, these pre-clinical data do not guarantee the success of human clinical trials. This point is poorly presented in the article. The author did not clarify that currently there is only one FDA-approved oncolytic virus therapy (T-VEC, approved for a subset of melanoma patients). The mentioned viral therapy for brain cancer is only in clinical trials. Missing these points give the false impression that this new therapy will be available for any cancer patients in the near future. The article should have also mentioned that some of the pre-clinical data suggest that CF33 therapy is more potent in combination with other therapies[3] suggesting that the virus treatment alone is not enough to lead complete remission (“cure”). However, it does have a high potential to improve outcomes of immunotherapy[2].

The mechanism for how oncolytic viruses are able to kill cancer cells were explained correctly.

Victoria Forster, Postdoctoral Fellow, The Hospital for Sick Children:
This article substantially overhypes early pre-clinical work with a viral therapy that has not yet been tested in even the earliest stages of human clinical trials. The headline is particularly misleading as I can find only three published papers suggesting the therapy has efficacy in lung, breast and colorectal cancers in cell lines and mouse models only.

Not only this, but the papers seem to use a very small and non-diverse range of cell lines and mouse models, which reflects very few subtypes of these cancers, meaning that even in these three cancer types, there is only the most basic preclinical evidence of efficacy. This is not unusual in the very early stages of testing a new therapy, but really highlights how far away this therapy is from deserving this level of coverage.

As a positive, what is different from some similarly misleading articles in the press from recent years about new cancer therapies, is that the scientific team behind the development of this cancer therapy is legitimate. Hence with a lot more testing and development, this viral therapy could indeed be effective in some types of cancer. This, however, simply has not been tested yet and any such evidence will not be generated for several years.

In summary, the article has grossly over-inflated the potential of a very, very early-stage viral therapy when there are several others in development and testing which have already shown notable clinical benefit.

Danielle E. Anderson, Assistant Professor, Duke-NUS Medical School:
The article is based on solid science, but the headline is misleading/too optimistic. The work performed so far has been done mostly in vitro (in a dish), with some in vivo (in animals) work on mice. Cancer cells are easier to kill when they are in a dish, or in animals with impaired immune systems. At present, not enough studies have been performed to say whether the cancer cells in a patient will be 1) adequately infected by this virus and 2) the patient’s immune system will not kill the virus before the cancer cells can be killed. Promising work, absolutely, but quite a way to go before the cure for “EVERY” cancer is available.

Maurizio Vacca, Postdoctoral Research Fellow, National University of Singapore:
This article is a newspaper article, obviously does not contain data. Reading the actual scientific paper[2] shows safety and antitumour activity in lung cancer models – the scientists clearly gave more information and data, and did not overstate and oversell the results.

The Daily Mail article has clearly a clickbait title, but the scientific article is really interesting, although it obviously contains preliminary data that the journalist tried to sell as a proven cure.

To put it in another way: Yes, this method kills cancer cells in a petri-dish, and so does a handgun.

UPDATE (22 Nov. 2019):
Dr. Maurizio Vacca’s comment was received and included after the initial publication. This comment further supports the original verdict and did not modify it.

We previously reviewed a similar claim about a universal cancer cure published by the Jerusalem Post in January 2019, which our reviewers found to be unsupported. We also analyzed its widespread propagation across news outlets and social media networks, showing that the claim was shared more than 3 million times, potentially misleading millions of readers.